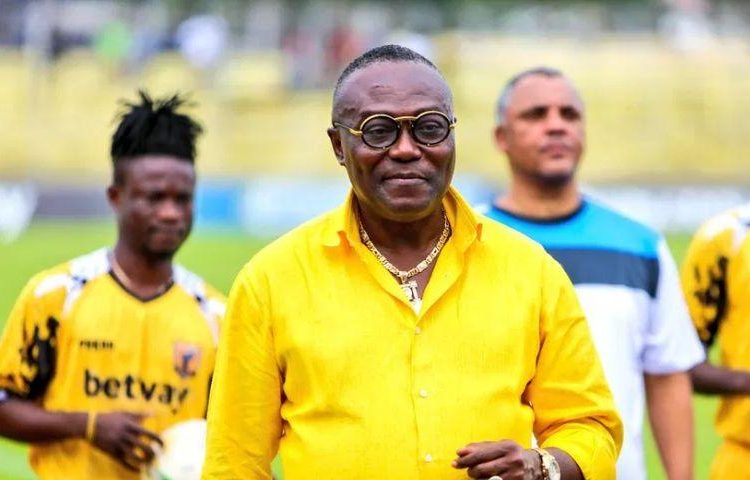 0
SHARES
963
VIEWS
Share on FacebookShare on TwitterShare via Whatsapp

The Miners are currently under investigation for match manipulation last season against Inter Allies.

In the ongoing 2021/22 Ghana Premier League season, the Obuasi based club have been poor and suffered a shocking 4-1 home defeat to Eleven Wonders in the matchday 18 games at the Len Clay Stadium.

The hierarchy of the club have been accused of failing to pay the playing body for almost four months.

Speaking to Kumasi based Oyerepa FM, the business mogul said: “I’m disappointed for and I regret using my hard-earned money to invest in Ashantigold SC,” he said.

He, however, also accused Ghana League Clubs Association [GHALCA] chairman, Kudjoe Fianoo, who is a former Chief Executive Officer [CEO] of the club of sabotaging him.

“Kudjoe Fianoo is the one sabotaging me Ashantigold. He’s the brain behind all that is happening at the club currently.

“I want all the supporters in Obuasi to remain calm, nothing has happened so they should stop sabotaging me.

“Kudjoe Fianoo and some people planned to kill me but they failed. Very soon I will make a lot of revelations and you will be shocked,” he added.

Ashgold sit 12th on the league summit with 22 points.

The Miners will play Karela United in the matchday 19 games at the CAM Park on Sunday.