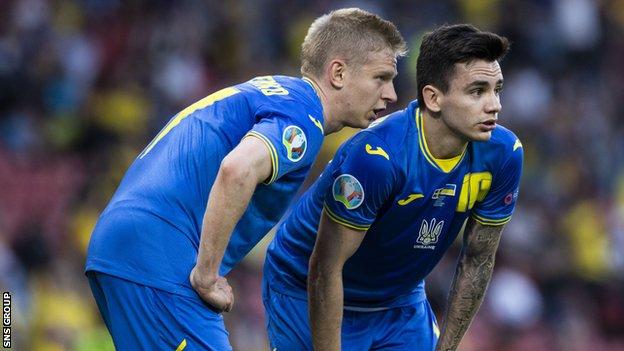 Ukraine have requested a postponement of their World Cup play-off semi-final against Scotland.

The nations were due to meet at Hampden on 24 March but football in Ukraine has been suspended following Russia’s invasion of the country.

The winners will play either Wales or Austria for a place at Qatar 2022.

World governing body Fifa say they are working with Uefa and the Scottish Football Association to “find an appropriate solution”.

Confirming the request, a spokesperson added: “Fifa expresses its deepest solidarity to everybody affected by what is happening in Ukraine. A further update will be provided in due course.”

Earlier this week, Scottish FA president Rod Petrie wrote “football is inconsequential amid conflict” in a message to his Ukrainian counterpart.

Petrie said he had written “to send a message of support, friendship and unity”.

Speaking prior to news of the postponement request, Scotland and Southampton midfielder Stuart Armstrong said: “Football takes a back seat in a situation like this when everyone is thinking of the welfare and suffering of the people of Ukraine.”

The World Cup draw is scheduled to take place on 1 April, with the tournament starting on 21 November.

Scotland have three Nations League Group B fixtures in June – with Ukraine again involved in those, along with Armenia and Republic of Ireland. Those fixtures could well be rearranged if an alternative date is needed for the play-off semi-final.

Ukraine crisis: Russia to appeal against football ban imposed by Fifa and Uefa