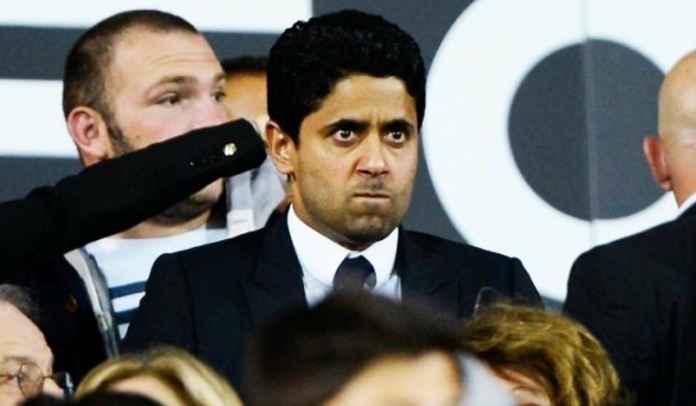 0
SHARES
1.5k
VIEWS
Share on FacebookShare on TwitterShare via Whatsapp

PSG president, Nasser Al-Khelaifi, went on a furious rampage after his side’s exit in the last 16 of the Champions League. This revelation was reported by several Spanish outlets last night.

According to reports, the cause of his anger was a perceived foul on PSG goalkeeper, Gianluigi Donnarumma, in the build up to Real Madrid’s first goal.

The Qatari was said to have been seen storming through the corridors at the Bernabeu post-match, shouting and searching for match referee Danny Makkelie says Marca.

The incident was described as ‘frankly unpleasant’ by reporter Monica Marchante, according to El Partidazo de COPE.

Reports from L’Equipe, suggest an excerpt from the referees’ report sent by UEFA quoted by Onda Cero, Al-Khelaifi and sporting director Leonardo: ‘Behaved aggressively and tried to enter the referee’s dressing room.

The PSG president, along with sporting director Leonardo reportedly ended up storming the wrong room; instead coming face to face with Real Madrid delegate, Mejia Devila.

According to Diario AS, a Madrid employee recorded the incident with his mobile, Al Khelaifi noticed it and hit his phone threatening: ‘I’m going to kill you.’

In the end, it was reported that PSG sent a protocol employee from the French club to apologise to the referees and Real Madrid.