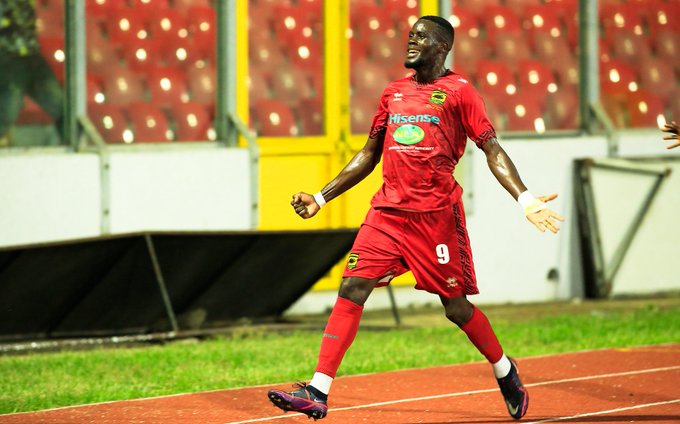 Kumasi Asante Kotoko extended their lead at the top of the Ghana Premier League following an impressive 5-0 drubbing of Bibiani Gold Stars, while their arch-rivals, Hearts of Oak, were stunned by Aduana in Dormaa.

The Porcupine Warriors had a perfect night as they cruised to a 5-0 win over Bibiani Gold Stars on Sunday night at the Baba Yara Sports Stadium. George Mfegue had a brace on the night with Augustine Agyepong, Franck Mbella and Boateng also getting on the scoresheet for Prosper Narteh Ogum’s side.

Sam Adams’ late first-half strike was enough to sink Hearts of Oak in Dormaa as Aduana Stars stay second on the GPL table.

The losing streak of Ashantigold ended as they defeated King Faisal 2-0 in Obuasi thanks to goals from Opoku Agyemang and Mamudu Kamaradin.

WAFA also recorded a 1-0 win over Real Tamale United thanks to a lovely first-half goal by Joshua Torsutsey.

Bechem United, away from home-recorded a 3-2 win over the relegation-threatened side, Elmina Sharks.

Ahmed Toure’s 65th-minute goal was enough to secure three points for Medeama in their home game against 17th placed side, Eleven Wonders.

Berekum Chelsea grabbed all three points against Karela thanks to an Emmanuel Sarpong 50th minute goal.

Asante Kotoko lead the pile with 44 points, followed by Aduana who have 36 points, with Great Olympics in third with 35.

The bottom three is unchanged with WAFA, Eleven Wonders and Elmina Sharks occupying the 16th, 17th and 18th spots on the league table.

GPL: The title race is not over – Samuel Boadu insists