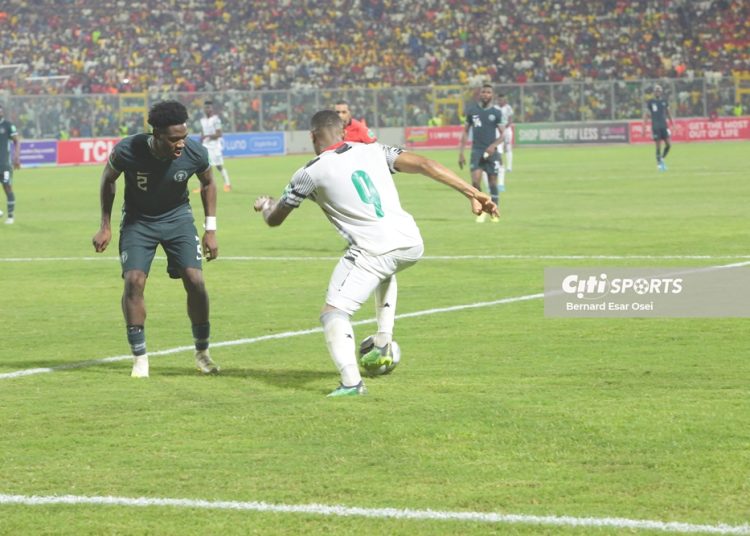 It is tempting to associate the Stars performance against Nigeria the first time out as very good or even excellent on the back of the early exit from the 2021 AFCON but that is a wrong assertion to make since Ghana’s campaign in Cameroon earlier this year doesn’t merit as a yardstick.

Standard Ghana put out in January in performance was so low, it can’t be used as a reference point in the first place because that was a flat out horror show.

The world needs to know, the universal booing of Jordan Ayew from the stands at the Baba Yara Stadium was far from embarrassing and shameful as many have pointed it out to be. On the contrary, it was a rare display of displeasure from a loyal fan base to a player who has failed to live up to his potential but has been consistently given the benefit of doubt and is still yet to return the favour, even at an advanced age of 30.

Had the first leg of the Jollof Derby been played before fans in Cape Coast, Accra, Essipong or Tamale, Jordan getting booed wouldn’t have been surprising since those locations aren’t particularly noted for their patient fans. It is very different for Kumasi fans who are the best supporters in Ghana and not just in football but sports-cue the Inter Colleges Athletics competition-culture and business.

In summary, Kumasi fans are the best supportive supporters and for them to universally boo Jordan Ayew clearly states enough is enough.  If there is a glaring change that needs to be made to the Black Stars starting line-up that drew goalless against Nigeria at the Baba Yara Stadium this past weekend, it has to involve Jordan Ayew’s exit for Osman Bukari or Joseph Paintsil. The younger Ayew is the latest polarizing striker for the Black Stars as the Crystal Palace attacker has taken up the spot of the still not retired Asamoah Gyan, with the latter frustrating fans with his profligacy in the biggest moments and delighting fans with crucial goal’s en route to those big moments.

While Jordan hasn’t scored as many goals as Gyan, his work rate and ability to draw fouls are admirable but those qualities he brings to the table are not so much welcomed by many a Ghanaian fan since the Black Stars lack a goal threat through the central forward line. To correct that against Nigeria in this second leg and ensure Ghana qualifies for the 2022 FIFA World Cup in Qatar, Coach Otto Addo needs to do a better job regarding changes to his personnel and the timing of those changes than he did in Kumasi.

While Addo received a ton of praise for his boldness to start Dennis Odoi in the former Fulham defender’s first outing with the Black Stars and doing the same with Felix Afena-Gyan, he showed his greenness in certain areas that could have played into giving Ghana an advantage heading into the second leg. Set piece duties needed a better executioner and the timing of his substitutes was poor considering his forward players were visibly exhausted from the demanding roles assigned to them.

Fatawu Issahaku and Jordan Ayew needed to be subbed after the 65th minute to aid the team to maintain its intensity on the Nigerian backline. It is telling, the Super Eagles were comfortable in the latter part of the second half just as they were late in the first half.

In tweaking the line-up, Ayew needs to be dropped to the bench because other players on the team bring those same contributions or qualities to the table. His qualities are easy to replicate and Ghana’s younger players provide better options in this regard than what Jordan does. In Osman Bukari and Joseph Paintsil, Ghana has guys that are faster, work harder and contribute more consistently in a high press than Jordan Ayew. Starting either of those two ahead of Ayew gives Ghana better odds of grabbing a goal or two to kill off the tie and seal progression to Qatar.

The shape of the team ought to be maintained since it is likely to serve the Black Stars qualification chances better in Abuja than it did in Kumasi. In the first leg, Nigeria played out a very compact midfield that had five players occupy the middle spaces at every given moment in the game. This made it difficult for Ghana’s inverted wingers Ayew and Fatawu Issahaku to find space to work with but in Abuja, Nigeria is expected to play a bit more openly knowing the threat an away goal for Ghana poses. Issahaku shows his youthfulness and naivety in stretches during games but needs to vary his style in order to put out a better performance than he did in Kumasi.

Cutting in and always looking to shoot on goal is all well and good but way too predictable; a quick interchange of passes around the edge of the penalty box after cutting on to his favourite left foot to open up the defensive line ought to be preached to him. The most ideal game plan upfront from Otto Addo should have Joseph Paintsil start on the left, Afena-Gyan in the middle and Issahaku on the right side of the attack with Bukari as a replacement for either Paintsil or Issahaku and Jordan Ayew as a middleman replacement.