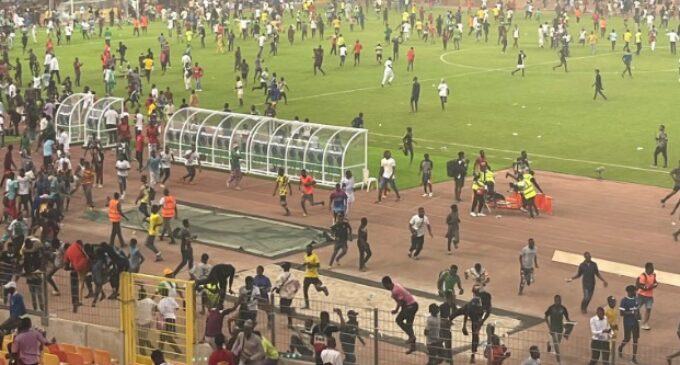 Some angry fans of the Super Eagles of Nigeria invaded the newly refurbished Moshood Abiola Stadium in Abuja and vandalised facilities in protest of the team’s failure to qualify for the Qatar 2022 World Cup.

The Ghanaians secured a 1-1 draw in Abuja on Tuesday to progress to the World Cup based on the away goals rule — after holding Nigeria to a goalless draw in Kumasi last Friday.

Thomas Partey’s opener in the 11th minute proved costly for the Eagles, whose equalizer through William Troost-Ekong in the 22nd minute was not enough to salvage the tie.

It is getting messy here. Destroying everything they can touch. Tear gas fired! pic.twitter.com/g49v8oV9Rg

However, following the final whistle, a crowd of irate fans stormed the pitch and damaged some stadium facilities.

In a now-viral video, the fans poured into the pitch from all sides, upturning the dugout while smashing its glasses in anger.

The vandalising crowd also carried out the act, despite attempts by security operatives to stop them with tear-gas.

Aliko Dangote reportedly spent $1 million for the renovation of some parts of the 60,000 capacity stadia in August 2020.

Meanwhile, some Nigerians on Twitter have described the act as a “show of shame” while condemning the vandalisation.

“The renovated Abuja National Stadium shouldn’t be vandalised by angry fans. The violence & Destruction mentality by the youths is worrisome,” a Twitter user wrote.

“That show of shame at the National Stadium was never about the match outcome. It’s about Nigerians looking for where to vent their anger & frustrations on. The country’s wicked leaders have made everyone a raving lunatic. The coming days won’t be as easy.”