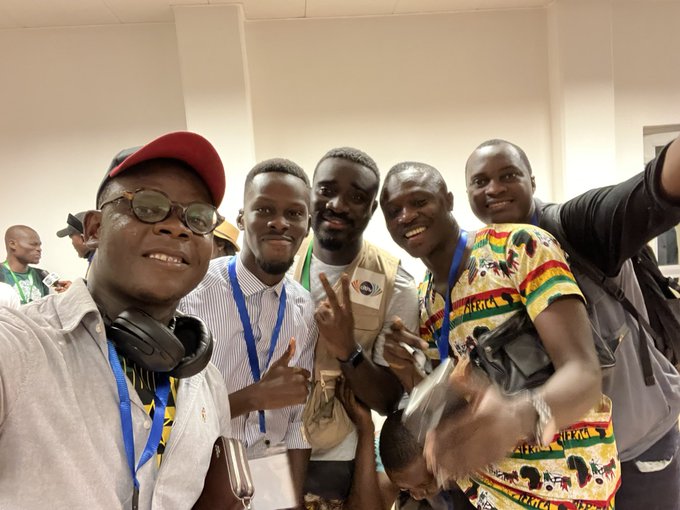 It all started when the fourth official indicated for five minutes of injury time to be added on at the end of the 90. I screamed in disbelief before retorting with the cynical expression, “did somebody die on the pitch?”

“Na your mama die” came a loud response from a Nigerian journalist who had been standing in front of me all game. We had some good banter at times but in the last ten minutes, with the Super Eagles crashing out, his demeanour changed. My jokes were no longer funny. Every word annoyed the heck out of him.

Sensing danger, I left my position and joined George Addo Jnr and Muftawu Nabila, both of Joy FM, who had been standing a few metres to my left.

Even before the full time whistle, we began to belt out the famous “God bless our homeland Ghana eee” jama tune. The rest of the press area was dead silent and our cheers drew attention as some folks whipped out their mobile phones and started to record.

At full time, we went wild in celebration. The Black Stars had booked a place at the 2022 FIFA World Cup at the expense of Nigeria. And they did it in front of a 60,000 (some say it was 70,000) capacity crowd in Abuja.

The fans were understandably upset. After all, Nigeria arguably possessed the better players; they did better at the AFCON in Cameroon and were many people’s favorites to pick that Word Cup ticket. Following a 0-0 draw in the first leg, it was expected Augustine Eguavoen’s men would finish the job in Abuja.

Eguavoen was categorical in the pre-match press conference that Nigeria would qualify; and winger Moses Simon famously said Ghana ‘would collect’ when they came to Abuja.

Expectations were not managed and fans were made to believe only one result was possible.

And so, even before the final whistle, when reality was now dawning on the fans that their road to Qatar was closing, optimism gave way for incandescent rage as fans started to jump onto the pitch to register their displeasure.

After this, I buttoned up my shirt to cover my Ghana jersey. This was moments after a Nigerian journalist/or someone in the media tribune threatened to beat the heck out of us if we didn’t shut up. pic.twitter.com/XaQU0DWz2q

At the final whistle, the Ghanaian players went wild; the few hundred Ghanaian fans were the loudest in the stadium, and well, us the Ghanaian journalists were expectedly in delirium.

But our celebrations altogether lasted about two minutes. A Nigerian journalist, Oluwashina Okeleji, signaled to us to be quiet. Soon, he asked us to hide anything that identified us as Ghanaians. This was his attempt to protect us. Moments earlier, we saw him in an argument with some Nigerian journalists who were threatening to beat us.

I wore a Ghana jersey beneath an unbuttoned jacket. I quickly buttoned up. TV3’s Yaw Ofosu Larbi took out his press vest that had “TV Ghana” written on the back, and Daniel Koranteng gave him a Citi TV vest to wear over his Black Stars training T-shirt. Benedict Owusu of Asaase Radio, took out his Ghana jersey and was only left with his ‘singlet’ or undershirt, to use the proper name.

Hey guys, we are safe!! Most of the Ghana journalists are in the press conference room now. @oluwashina did a good job by protecting us and leading us here. Nobody is hurt. pic.twitter.com/OIAEEpx8sA

We were now tucked at the back of the press stand, almost ducking and hiding our faces behind the chairs.

At this point, several hundreds of fans had already stormed the pitch, ripping everything in their wake – from goalpost nets to advertising boards and everything in between.

The Black Stars players, who had gone to celebrate with the few hundred Ghana fans, were pelted with stones and water bottles and they were hurriedly ushered into the dressing room. It’s the most exposed I’ve ever seen the Black Stars players and one of them could easily have been injured by the rampaging fans on the pitch.

With both Ghanaian and Nigerian players in the dressing rooms, the fans’ relentless bludgeoning of the stadium continued unabated.

At this point, the Ghanaian fans were held up in their little corner. The small river of red, gold, green, had disappeared as fans took off their jerseys and hid their Ghana flags.

Nigerian fans were waiting for them at the exit gates, and there was no way out of the stadium for the Ghanaian fans without being attacked.

The chaos had forced security officers to fire teargas canisters onto the pitch in an attempt to disperse the raging crowd.

Quite scary with teargas deployed and all. Whew! pic.twitter.com/fIFn1odgHc

While all this was happening, we were still confined to our little corner, behind some press area chairs.

The Ghanaian fans were stationed behind the south goalpost and to access the tunnel meant at least a distance of 80 metres to cover from where they were to the tunnel.

Once they got onto the pitch, the rampaging Nigerian fans had a field day, pummelling them with bottles of water while also stealing from them.

Dr. Kwame Baah-Nuakoh, GNPC’s Head of Sustainability, lost two mobile phones. Collins Atta Poku, a journalist with Wontumi TV, who had watched the game with the Ghanaian fans lost his wallet and along with it some money.

“At that point, I only cared about my passport and did not even notice that my phones were stolen,” Baah-Nuakoh later told me.

Once the fans were inside the tunnel, it was now time for us to find our own way out. Our exit wasn’t as dramatic, though, albeit not easy.

We followed Oluwashina, ducking the whole time behind him, while trying to navigate through a sea of angry Nigerian fans.

Meanwhile, in the tunnel, the Ghanaian fans continued to be held in the hallway. They spent an hour and a half just waiting for the stadium to clear so they could leave.

During that wait, more drama ensued. The CAF Doping Officer, a Zambian called Dr. Joseph Kabungo, after taking urine sample from Ghana defender Alexander Djiku, on his way back from the doping office, collapsed right in front of the Ghana players’ dressing room, in the full glare of the anxious fans who were held in the hallway.

“Oxygen masks were brought to try and resuscitate him. The ambulance arrived a bit later to take him to the hospital,” Atta Poku, who watched the whole episode unfold told me.

Buses arrived later to take the Ghanaian fans to the Ghana High Commission, where they had dinner before later heading to the airport for their trip home.

Once we heard of their departure, we now had to find our own way out of the stadium.

Sheikh Tophic, Benedict, Faisal Chibsah and myself got a taxi on the street and went straight to the airport.

The conversation on our way centered on how lucky we were to be alive. But soon, we realized we all did not have any local currency with us, as none of us had the chance to change money when we arrived.

Thankfully though, our taxi driver agreed to take the cedi equivalent of our taxi fare in naira.

That was a huge relief in the end, and a reminder that Ghanaians and Nigerians were the same after all, and what had happened in the stadium was not the only thing that defined our  time in Nigeria.

It was a jarring experience nonetheless, but at the end of the day, when we show up in Qatar, all this will be forgotten and I guarantee there will be Nigerians cheering the Black Stars on – from Lagos to Abuja.