“I learnt a lot from Baba Rahman” – Gideon Mensah 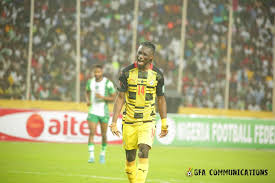 Gideon Mensah says that his time deputizing for Baba Rahman has helped his development.

In light of Baba Rahman’s injury and absence from the Black Stars, Mensah had to step up and started both games against Nigeria in the recent World Cup Qualifiers.

Speaking exclusively to Citi Sports, Mensah explained despite wanting to start, he preferred to look at the positives:

“I never doubted my time will come. I am someone who believes in myself so I never feared. I also learnt a lot playing behind a senior player (Baba Rahman), so when I got the chance against Nigeria, I was ready because I had seen what I needed to do, the place might not be mine but I always be ready to step up.”

When asked about his club situation he explained that he was not content to be a back up and the desire to play at a higher level had pushed him to seek various loan moves:

“The manager told me I would be a back up to the captain, and I did not want to be a back up. And after going on loan to Portugal I told my agent I needed to play in the top 5 leagues. It has not gone well but I can tell next season will be good for me”

You can watch the full interview here