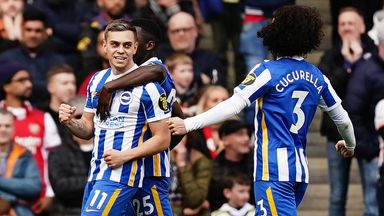 Arsenal’s top-four hopes took their second big hit of the week as Brighton held on during a dramatic finish to end a seven-game winless run with a deserved 2-1 victory at the Emirates Stadium on Saturday.

The Gunners were way below the required standard during Monday night’s 3-0 defeat at Crystal Palace but there was no positive response five days on as Leandro Trossard (28) punished another tame opening spell from Mikel Arteta’s side.

Gabriel Martinelli had a header on the stroke of half-time scrubbed off when VAR eventually judged him to be offside in an extremely tight call but Enock Mwepu converted a fine half-volley (67) to put Brighton in control.

Brighton’s travelling support were bouncing in their corner of the Emirates after that – they’d only seen their side score once during their wait for a win – but their nerves were plain to see during a frantic finale after Martin Odegaard’s deflected long-range hit (89) led to Arsenal finally upping the intensity in search of a last-gasp equaliser.
Robert Sanchez pulled off a sharp stop from Eddie Nketiah deep into injury-time to ensure there was no comeback, though, and Brighton move up to 11th after another frustrating outing for Arsenal followers. They’ve missed the chance to move fourth twice this week and it’s now three defeats in four in the league.
North London rivals Tottenham – who are level on points but sitting in the Champions League qualifying spots on goal difference – will try to capitalise at Aston Villa.
The derby between those sides, now scheduled for May 12 could well be decisive in the race for a place in Europe’s top club competition next season – but with Arsenal again open at the back and disjointed in attack they could well be out of the picture by then anyway.
Source: Sky Sports
Tags: ArsenalBrighton and Hove AlbionEnglish Premier League
Previous Post