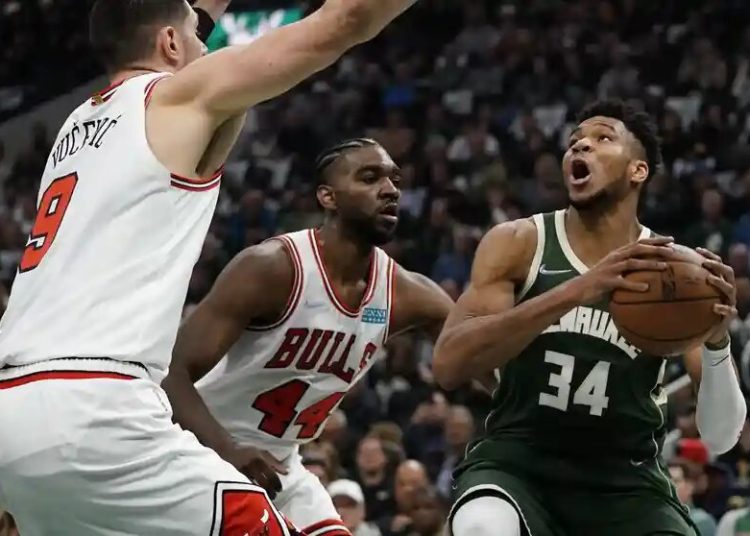 The Bucks lost forward Khris Middleton to a sprained MCL and responded with three consecutive victories over the Chicago Bulls, advancing to the second round of the NBA playoffs with a 116-100 win in Game 5 on Wednesday.

The Bucks will play the Celtics in the second round; Game 1 is scheduled for Sunday in Boston.

After splitting the first two games of the series, Milwaukee asserted its dominance over Chicago. The Bucks held the Bulls to under 100 points in three of the five games, winning each of the final three games by double digits.

Giannis Antetokounmpo scored a game-high 33 points on 11-of-15 shooting, adding nine rebounds, in the series finale.

“After Game 2, the team knew what the deal was,” Antetokounmpo said about closing out the series without Middleton. “We knew what we had to do, we had to be desperate. We had to go out there and compete at a high level. Pay attention to detail as much as possible. Help one another defensively. We’ve got to do it as a team. It’s not a one-man show or two-man show.

“Now we’re going to a different series, playing a different team, a very, very good team, and hopefully we can do it again.”

The Bucks turned up the defensive intensity to make up for the absence of Middleton, who sprained the MCL in his left knee during the fourth quarter of Game 2, and they will be facing at least the beginning of the next round without one of their best players.

The team’s initial timeline for Middleton had him scheduled to be re-evaluated in two weeks, which would be next Wednesday, after Games 1 and 2. Coach Mike Budenholzer confirmed after Game 5 that Milwaukee will begin the next series without Middleton.

“We’ve been talking about the depth of the roster, the quality of the roster a lot this season,” said Budenholzer, who improved to 8-0 in close-out games with the Bucks. “Other guys have gotten opportunities and played well. Our defense has tightened up, we’ve leaned hard on that these three games.

“We miss Khris; I don’t think anybody underestimates how important and how effective he is for us. While we don’t have him, we’ve got to be our best all up and down the roster.”

With Bulls guards Zach LaVine (health and safety protocols) and Alex Caruso (concussion protocol) both sidelined for Wednesday’s game, the Bucks were able to key in defensively on Bulls star DeMar DeRozan, who was limited to 11 points on 5-of-10 shooting.

All 10 of DeRozan’s field goal attempts were contested, and he was double-teamed 27 times in Game 5, the most doubles of a single player in a playoff game in the past three seasons, according to research by ESPN Stats & Information. He faced 24 double-teams in the previous four games combined.

“We threw everything at him,” Budenholzer said. “He’s such a good player, the season he’s had. The ability to make shots, the ability to get to the free-throw line, he’s phenomenal. He saw a lot of people in front of him, around him, just basically always.”

DeRozan did his best to get his teammates involved to counter, but the Bulls struggled to hit enough open shots. Chicago shot just 7-for-25 (3-for-18 on 3s) off DeRozan’s passes. Overall, the Bulls knocked down just 15 of 52 3-pointers Wednesday.

“You’ve got to give credit to them,” DeRozan said. “I expected it, but I didn’t want to get carried away and try to go out there and shoot 30 times. I trusted my guys. I didn’t care how many shots they missed. Whenever I felt I had the right pass to make, I tried to make the right play. I’m going to live and die with those guys making and missing shots. Give the Bucks credit defensively, they locked in and took away what they needed to take away. Congrats to them.”