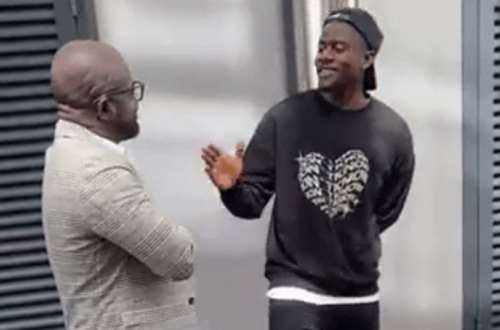 President of the Ghana Football Association met up with Southampton defender Mohammed Salisu in the United Kingdom in his latest attempt to convince the highly rated center back to play for Ghana.

Salisu has rejected multiple approaches from the GFA to represent the country of his birth, always insisting he is not ready.

Okraku posted a video on Friday morning in which he is seen in a hearty chat with Salisu in the Hausa language, amidst laughter.

In the 26 second video, Salisu seemed to suggest that Ghana football authorities are largely responsible for his non-committal attitude towards the team.

The video started with Okraku telling Salisu; “If you don’t play [for the Black Stars], will I be the one to play?” as both parties broke out in laughter.

A smiling Salisu then gave credence to rumours of his misgivings about football authorities due to an issue he encountered in his early days.

“The problem is, everything is done with you [referring to football authorities]. Without you, things don’t work. Hope you understand my point.

“As for players, they abound. But the issue [which makes players shy away from call-ups] lies with you [authorities],” he said.

Many attempts have been made to get Salisu Mohammed play for Ghana at the international level but none has been successful so far.

Salisu was first called up by former coach Kwasi Appiah for the start of the 2021 Afcon qualifiers in November 2019 but the then Real Valladolid player failed to turn up with a rib injury excuse.

CK Akonnor took over from Kwasi Appiah as Black Stars head coach a couple of months later and was also not successful in his bid to have the player.

Salisu has been about the best performing Ghanaian player in Europe’s major top leagues with many a black Stars fan urging the GFA to do all things possible to further strengthen the national team’s squad with the player ahead of the Qatar 2022 Fifa World Cup.

Footy-Ghana.com gathers that Salisu Mohammed reiterated his commitment to representing only Ghana at the international level but asked for time to communicate his availability.