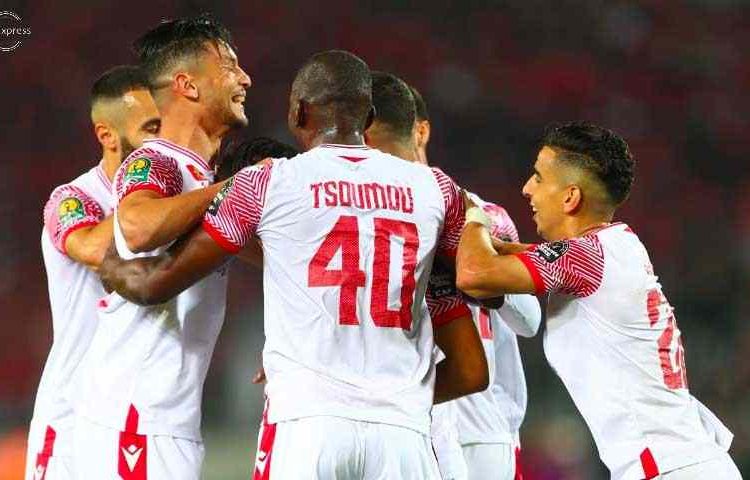 Wydad Casablanca booked their passage to the 2021/22 Caf Champions League final after holding Petro de Luanda to a 1-1 draw at the Mohammed V Stadium on Friday, to win 4-2 on aggregate in the semifinals.

The Red Castle took a 3-1 advantage into the second leg on home soil, but found themselves under pressure early on and fell behind when Gleison opened the scoring on 21 minutes.

Amine Farhane would ease their nerves just seven minutes later though when he equalized from a corner to dash the Tricolores’ hopes of reaching the final for the first time.

Walid Regragui’s side now awaits the winner of the second semifinal between Al Ahly and ES Setif, with the defending champions firmly in command of their tie after winning 4-0 in the first leg.

Petro needed an early goal to temper the boisterous home support and they threatened after just four minutes when Mindinho tested Ahmed Reda Tagnaouti with a header from Gleison’s cross.

The visitors went close again at the quarter-hour mark as Tiago Azulao dragged a shot narrowly past the near post from inside the area on the right and the Brazilian fired narrowly over the crossbar from range three minutes later.

The goal they had so desperately hoped for arrived on 21 minutes via the boot of Gleison, who drilled a shot from range into the bottom left corner of the net to reduce the deficit to one goal in the tie.

However, their lead lasted only seven minutes as Farhane made contact with an inswinging corner from the right to glance his header beyond Wellington to restore parity on the night.

The Angolan outfit continued to plug away and they came close to retaking the lead on two occasions in stoppage time, with Azulao steering a header just to the right of the goal from a free-kick before Mindinho was denied at close range by Tagnaouti moments later.

Alexandre Santos’s team kept knocking on the door in the second half as Anderson Cruz, Pedro Pessoa and Yano all had attempts at goal, but none of the trio were able to hit the target.

Cruz did manage to force Tagnaouti into a save with his next effort on 77 minutes from inside the box on the left, while Ayoub El Amloud wasted a glorious chance to score at the other end on 81 minutes when he cleared the target from inside the six-yard box after the ball dropped at his feet from a corner.

Wellington pulled off his first save of the match five minutes later to keep out a header from Ayman El Hassouni and Tagnaouti was on hand to deny Cruz and Erico Castro in quick succession in stoppage time to ensure it remained 1-1 at full-time.