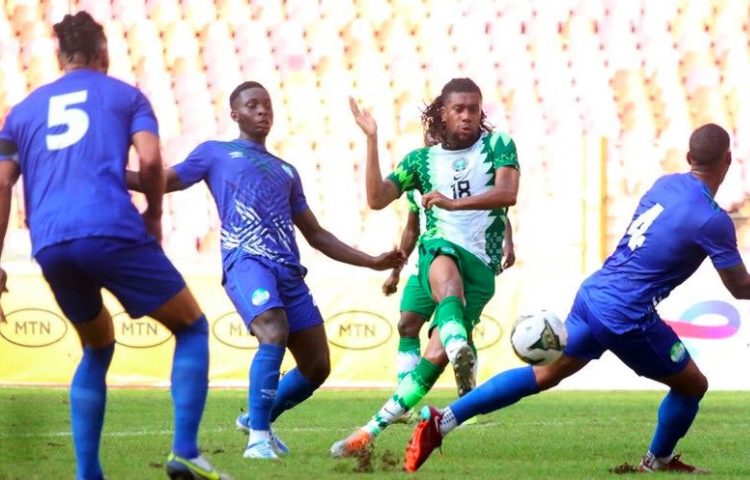 A surprise defeat for Egypt away to Ethiopia in Lilongwe and a nervy win for Nigeria at home to Sierra Leone in Abuja were the headline results of a busy Thursday in the 2023 Africa Cup of Nations qualifying.

The Super Eagles had to come from behind to claim victory over the Leone Stars, as Alex Iwobi and Victor Osimhen struck in the wake of Jonathan Morsay’s early opener for the visitors at the Moshood Abiola National Stadium in Abuja.

Yet Nigeria’s win only leaves them second in Group A, as Guinea-Bissau lead the way after their emphatic 5-1 win over Sao Tome & Principe. Alfa Semedo, Zinho Gano (two), Zidane Banjaqui and Jorginho struck for the Djurtus at Stade Adrar in Agadir.

Group D’s two matches have left all four teams level on three points, as Ethiopia stunned Egypt 2-0 in Lilongwe – thanks to first-half strikes from Dawa Hotessa and Shimelis Bekele – at the same time that Guinea edged Malawi 1-0 in Conakry with a late goal from star midfielder Naby Keita.

Group K also finally got underway, with Morocco coming from behind to defeat South Africa 2-1 in Rabat.

Bafana Bafana rode their luck, scoring first through Lyle Foster on the counter attack and relying on some superb saves from goalkeeper Ronwen Williams, but ultimately they were outclassed by the Atlas Lions, who levelled through Youssef En-Nesyri early in the second half and scored a late winner via Ayoub El Kaabi.

The day’s early games were played in Groups C and G, with heavyweights Cameroon and Mali claiming away wins over Burundi and South Sudan respectively.

The Indomitable Lions moved to the top of Group C with a 1-0 win over Burundi in Dar es Salaam thanks to Karl Toko Ekambi’s first-half strike, while the Eagles defeated South Sudan 3-1 in Entebbe (courtesy of injury time goals from Sekou Koita and Aliou Dieng, despite being down to 10 men) to open a three-point lead at the top of Group G over Gambia and Congo.

In Group H, 2023 tournament hosts Ivory Coast were held 0-0 in Soweto by Lesotho. The Elephants lead the standings on four points, with Zambia and Comoros on three apiece, while Lesotho have put their first point on the board in fourth place.