I don’t have to belabour this point. They are the pacesetters in most respects and can claim to be the most attractive and richest Premier league club in Ghana according to figures released by the Kwesi Nyantakyi administration some time ago. All this places a responsibility on the Porcupine Family to set a good example in club administration for others to follow.

It is therefore sad to see them engage in unnecessary boardroom wrangling that really threatens to eclipse the fine performance of the players on the pitch. A performance that won the club a splendid 24th national league title to enter Africa in the coming season.

The apparent struggle for supremacy involving technical brain Dr Prosper Ogum, CEO Nana Amponsah, and the board of directors, portray a bad omen for the 87-year-old.

Indomitable soccer armada, described by Ohene Djan, that Sports administrator supremo, as “enthusiastic and ever defiant, the club over whose popularity the sun never sets”.

The whole confusion is about how to strengthen the playing staff for the next season. It is natural that different people think differently. So the most appropriate solution is for a compromise. Indeed, compromise does not mean weakness but rather shows maturity.

Unfortunately, this did not appear to happen in a reported hot tempered zoom meeting between coach Ogum and the board resulting in the coach unceremoniously announcing his resignation along the line.

It has been a field day for social media adherents with varied negative stories all over the place. Kotoko supporters seem to be completely in the dark. The wonder is a fresh publication announcing an impending pre-season tour of Turkey by Kotoko. It looks like Manhyia should quickly have to step in to stop the simmering confusion in the fabulous club of Africa before the situation gets out of hand.

Unfortunately, it is this mini boardroom crisis that has triggered the club’s withdrawal from the upcoming Ghalca Top Six competition. This to my mind is a big stab in the back of Ghalca knowing so well that the Porcupines are the big financial bone of the association and their absence will definitely affect gate takings.

It’s a shame Kotoko are setting such a bad example that will let departed pioneers like Ampofo Manu, Zac Bentum, Budu Acquah and Nana Yaw Owusu shed tears in their graves. Surely there must be a rethink.

Please don’t accuse me of crying more than the bereaved. I qualify to be in the Kotoko family. I have been a great admirer of the club since 1982 when I resigned from the state owned Daily Graphic in the aftermath of Rawlings so called revolution.

I was co-opted as an ex officio of Yaw Bawuah’s administration as PR consultant. I edited the novelty Kotoko Weekly newspaper with huge access to the players and management.

I had access to both the technical team comprising coach Sunday Ibrahim, team manager Malik Jabir and physio man Omono Asamoah. Mr. S. K. Mainoo, the Otumfuo’s celebrated rep on the board was always around to give inspiration. The players were free to express their candid views on any matters arising. I was given a lot of privileges including presence in the dressing room even in Africa Cup matches.

Everybody’s contribution was respected in the team building. No wonder Kotoko reached the CAF Cup final twice back to back and won the cup handsomely in 1983 with young skipper Papa Arko in charge. I was a trusted PR man privy to a lot of classified info. Definitely I can’t be an outsider.

It’s unfortunate that almost four decades down the line, Kotoko’s classmates like El Ahly of Egypt and Englebert are still riding high leaving the fabulous boys way behind for such a long time. To be fair however it is on record that successive administrators like Ofori Nuako, Georgido, Herbert Mensah, Sylvester Mensah and Dr K.K Sarpong valiantly tried to close the gap but did not quite make it. 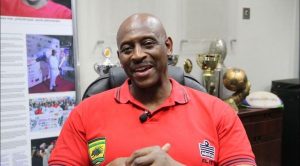 Dr Sarpong, for instance had very progressive plans but had to quit suddenly for personal reasons. I won’t hide the fact he left a vacuum that was rather poorly filled by former star player Opoku Nti who clearly saw the difference between administration and playing football.

It’s a whole story to be told later as I was then in the thick of events, editing the club’s official mouthpiece, Kotoko Express. After a topsy-turvy period, the club began to shape up and the Kotoko fever was everywhere.
The just ended season gave Kotoko fans a glimmer of hope that with Prosper Ogum’s fine handiwork the club might hit the international headlines one more time.

It is against this background that lovers of the club are quite disappointed in management’s inability to unite for a common purpose.

The practice in many top clubs worldwide is to strengthen the team whenever a continental campaign is at hand. You definitely need more cash to beef up your team but it doesn’t appear right to sell your best players because you need funds. You need to strike a balance and that’s where compromises become paramount.

This is the reason why you will expect management to make the work of the coach easier to produce the goods by retaining most of the fine materials on hand It is a dicey situation. A friend of mine used to say that “a bird in hand cannot fly and that it is no good looking good without producing the goods”. His argument is why sell the chicken that lays the golden eggs.

It is acknowledged by all that Kotoko supporters are first class in filling the stand. Crowd support is massive no matter the gate fees. It is therefore left to the boardroom people to sink their peculiar biases, avoid petty squabbles, entertain mutual respect, eschew suspicion and move in unison to achieve the best for the teeming Kotoko fans and by extension the huge followers of football who derive a lot of heathy satisfaction from watching games.

There is no doubt that Sports and Games serve as stress relief. Look at the attendance at the just ended Athletics World Cup in the United States of America. Fantastic.

It is no accident that at this time of worldwide economic challenges, major sporting activities are popping up around the globe.

The Commonwealth Games will start this week in the British city of Birmingham and Ghana will be there in full force for the 17th time.

From Ghana’s maiden appearance at the 1954 Games in Vancouver, Canada where we had a token team of eight athletes, this time round there is a strong contingent of more than 100 competitors in 13 sports disciplines.

Even though it has not been that rosy of late, Ghana has a tradition of parading top medal winning sprinters and boxers and we need to revive that tradition. I recall that in Perth, Australia, 1962, for example, Ghana was adjudged the best amateur boxing nation winning two gold medals and four silver meaning we had six boxers in the final.

In athletics, long jumper Mike Ahey did Ghana proud with a leap of 26ft 5 ins to take a gold medal and with it a Games record.

“Ghana was also outstanding in the 1966 Games in Kingston, Jamaica where seven of our nine boxers won medals- three gold, two silver and two bronze.

In athletics, Ghana won two gold and set a Games record in each case. Stan Allotey won the 200 yds gold in a record time of 20.6 secs beating the old time of 20 9 secs. He had earlier equalled the old time in the heats. He then teamed up with E.C O Addy, B. K. Mends and J A Addy to win the 100×4 yds gold.

Even though Ghana is sending the largest contingent so far to the Games we don’t expect to shine in all of them.
We have our traditional brilliance in the men’sprints quartet to protect. So far the current quartet comprising Benjamin Azemati, Joseph Paul Amoah, Sean Safo Antwi and Emmanuel Yeboah have proved quite reliable to deliver the goods for some of us, the old timers, to fondly remember the good old days.

It is my fervent hope that in the midst of this global economic challenges the sporting world will continue to provide some thrills with many such competitions in order to relieve tension whilst we eagerly await the elusive normal times.

Cheers everybody and keep loving sports.