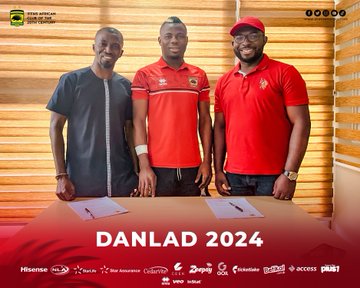 Goalkeeper Danlad Ibrahim has officially signed a two year contract extension with Kumasi Asante Kotoko ending reports of a move away from the club.

The extension was communicated by the Kumasi based Club earlier today with Kotoko CEO Nana Yaw Amponsah on hand to append his signature to the deal.

Aside from Kotoko, Ibrahim has competed in the BetPawa Ghana Premier League for King Faisal and Berekum Chelsea on loan deals.

Ibrahim starred for Ghana at the Under 17 World Cup in India and progressed to the Under 20 level where he won the 2021 African Cup of Nations Under 20 title.

He won the Golden Glove Award at the 2021 African Cup of Nations Tournament.

Manchester United: Cristiano Ronaldo will soon reveal 'the truth' about his future