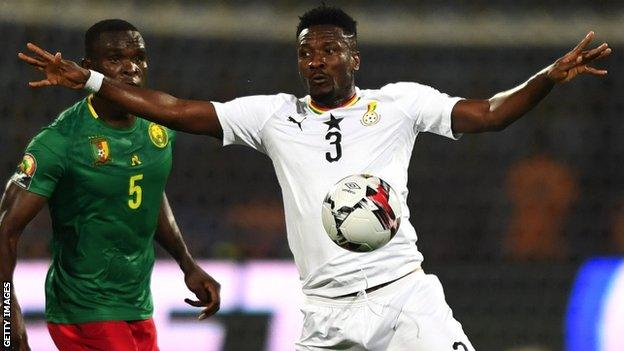 In ideal circumstances, Belgian Pro League Joint Top scorer David Atanga of Oostende should be the talk of the town as much as Red Star Belgrade’s Osman Bukari.

The wingers have put together a stellar collection of top performances to start the young football season while making strong cases to be picked for national assignments later this year. Shockingly, such talk is bound not to happen in the coming days as talk has shifted to an outlandish retro prospect playing out before our eyes.

The 2022 FIFA World Cup in Qatar is a couple of months away but there has been renewed interest in the Black Stars possible setup to take on Uruguay, Portugal and South Korea thanks to Asamoah Gyan. The Baby Jet must have drowned himself over the weekend in the very popular Michael Jordan themed “The Last Dance” Documentary to tease a return.

Like the main protagonist of the 10 Part Documentary Michael Jordan who had trouble leaving the sport he dominated, Gyan has had a difficult time walking away from his shining career.

The most accomplished player from the African continent in the history of the World Cup dropped an absolute bomb via an interview with the BBC as he announced his intention to play in Qatar. Having the greatest goal scorer of all time for Ghana announce his readiness to play for the Black Stars should be as obvious an announcement as they come.

However, Gyan hasn’t featured in a competitive football setting since a brief run with Legon Cities in the Ghana Premier League in the 2021-2022 Season. Beyond that, his absence from the Black Stars stretches far out enough to rule him out of contention for a spot in the playing unit. Gyan’s hint has generated a lot of talk and the sharply varied views on the issue reflect what Technical and Administrative Managers of the Black Stars are going through at this moment.

Former Black Stars Winger Christian Atsu has thrown his weight behind the call for Gyan to be included in Ghana’s playing unit for the Qatar trip as a way to “Honour” the legendary striker. However, this doesn’t bode well for the young group Coach Otto Addo has primed to make a statement on Ghana’s return to the World Cup since a handful of budding talents have to make way to accommodate Gyan (who turns 37 in November) and his cohorts who also deserve an “honourable” send off.

Despite being 41 years, Bra Laryea is the first name on this list as it should be, considering the dire circumstances that led to him missing out on not one but two World Cups. In 2006 and the famous 2010 run, the former Hearts of Oak and Hearts of Midlothian winger was dropped in the final cuts despite being a popular figure with fans and in the dressing room. Fans would love to see Bra Laryea finally step on the pitch of the biggest football stage of all with his braids, flamboyant substitution entrances et al many believe was cruelly wrestled away from him. Despite venturing into coaching for a while, improvement in science and technology plus a little discipline should whip Laryea back in shape in time to play in Qatar alongside Gyan.

Muntari is still an active player who is still capable of competing with youngings as demonstrated by his lead role in Accra Hearts of Oak triumphs in the FA Cup in the past season. 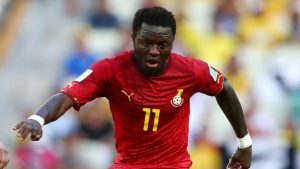 The former Inter Milan player’s international career came to an inglorious end by falling out with the Black Stars handlers at the 2014 World Cup in Brazil. Per Christian Atsu, Muntari qualifies for an honourable send off at the World Cup; considering his solid outing with Hearts of Oak and in line for a reported move to arch rival Kumasi Asante Kotoko, Muntari overly qualifies to play in Qatar.

El Capitano played at the 2006 and 2010 World Cups and was on the verge of making history as the first African Captain to lead his nation to a World Cup semifinal matchup. 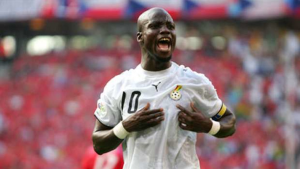 Had Baby Jet converted the last minute penalty against Uruguay at the quarterfinal, Appiah’s last World Cup memory wouldn’t be filled with hurt. Unlike Gyan, who has quite a way to go to get in shape physically, 41 year old Appiah is still jacked at least judging by his looks in commercials. Considering his immense contributions to get Ghana to the elite stage, it is only fair Appiah gets the chance to have a proper farewell tour in Qatar.

Ghana’s Pablo Aimar is in the Muntari category as an active player for TPS in Finland after playing out the past season for fellow Finnish side Inter Turku. His last involvement with the Black Stars at a major competition was the 2013 AFCON. 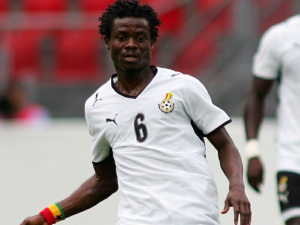 The 36 year old expressed his interest to feature for the Black Stars again in 2020 and with the South African edition as his sole run in the World Cup, it is time to get Mikel Obi’s Best Friend back in the Black Stars.