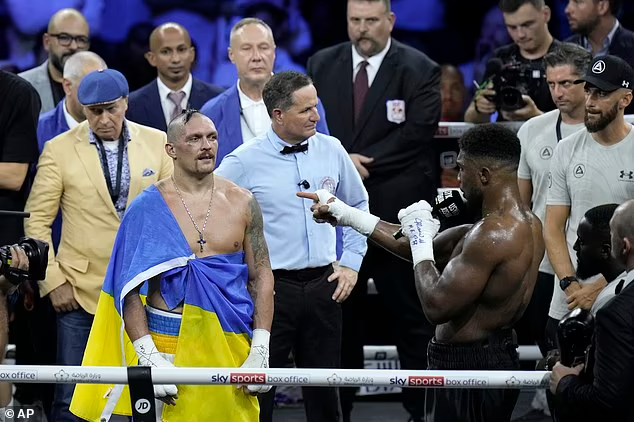 Anthony Joshua has spoken out on social media for the first time following his split-decision loss to Oleksandr Usyk in Saudi Arabia on Saturday evening.

The Brit was emotionally charged as he gave a bizarre post-fight monologue from the ring following the devastating defeat that saw him miss out on the chance to regain his heavyweight championship belts.

Joshua then teared up during his post-fight press conference after being asked whether he was proud of how he had performed against the Ukrainian.

The former champ revealed he had to take himself to a ‘dark place’ for the rematch with Usyk and explained his emotions got the better of him in a short statement posted online.

Writing on his Twitter less than 24 hours later, Joshua said: ‘I wish Usyk continued success in your quest for greatness.

‘You are a class act champ. Yesterday I had to mentally take myself into a dark place to compete for the championship belts!

I had two fights, one with Usyk and one with my emotions and both got the better of me.’

The Watford-born orthodox boxer then provided a further update in a later Tweet, as he admitted to letting himself down:

‘I’ll be the first to admit, I let my self down. I acted out of pure passion and emotion and when not controlled it ain’t great.

‘I love this sport so so much and I’ll be better from this point on. Respect.’