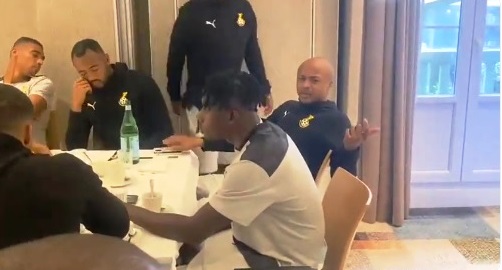 Mohammed Salisu has been sighted in the camp of the Black Stars ahead of the team’s headline friendly game against Brazil on Friday, September 23.

The Southampton defender received his first call up to the national team earlier this month after making himself available for selection following a series of conversations with the Ghana Football Association (GFA) President Kurt Okraku.

Photos of players at the Black Stars camp in France have surfaced on social media but for former Valladolid player Salisu Mohammed.

However, a video posted by the team’s official twitter handle a few minutes ago had Salisu seated next to Black Stars Captain Andre Dede Ayew at a table with the rest of the team having breakfast.

Salisu and Dede Ayew were spotted at the head of the long table with Jordan Ayew, Andre’s brother, and Daniel Kofi Kyereh seated on either side right next to Salisu and Dede.

Ghana plays Brazil on Friday at 18:30 GMT at the Stade Oceane before taking on Nicaragua in preparation for the 2022 FIFA World Cup in Qatar.

Ghana has been drawn in Group H alongside Portugal, Uruguay and South Korea in its fourth appearance at the World Cup.

Salisu has started in all seven English Premier League games for Southampton this season and has made 18 tackles to rank 13th in the league.