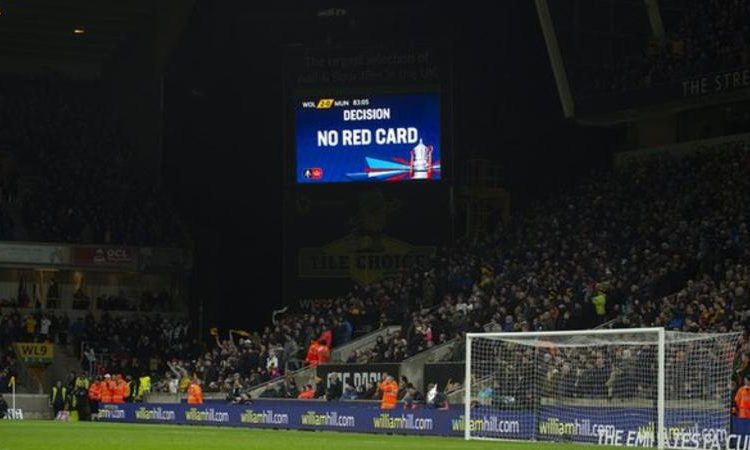 The Big screen at the Molineux

Video assistant referee system (VAR) replays will be displayed to fans during this season’s FA Cup semi-finals at Wembley if a decision is overturned.

VAR’s decision will be announced on the big screen before a “definitive video clip” is shown.

It comes after criticism that decisions are sometimes unclear for fans inside stadiums.

The Football Association said it would provide “clarity” and “transparency” for those in attendance.

“The FA Cup has been at the forefront VAR testing process in England and this is the next step in its development,” said Andy Ambler, the FA’s director of professional game relations.

Replays of incidents reviewed by VAR were shown on big screens at the 2018 World Cup in Russia.

VAR has been used regularly in FA Cup ties over the past two seasons, making its debut in English football in Brighton’s third-round win over Crystal Palace on 8 January, 2018.

It will be in use for both semi-finals this weekend as well as the final on 18 May. Manchester City face Brighton on Saturday before Watford play Wolves on Sunday.

Last month, Swansea players bemoaned the lack of VAR during their FA Cup quarter-final exit as Man City’s equaliser was a contentious penalty and their winning goal looked to be offside.

VAR was not in use despite the Liberty Stadium being equipped for it.