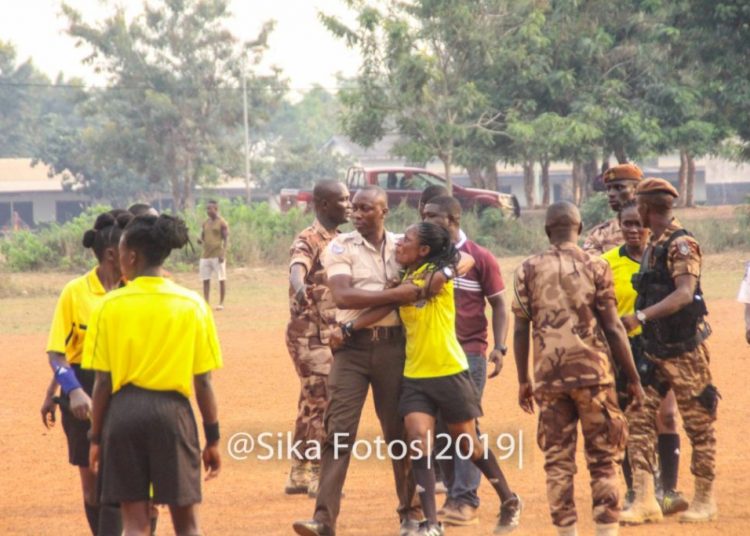 Referee Bremansu being escorted off the field by some Prisons officers after the assault (Image credit: Sika Photos)

The GFA Disciplinary Committee has fined Prisons Ladies FC an amount of GHc5000.00 and has ordered the club to report the supporter who assaulted Referee Theresa Bremansu (on April 7) before the police station with jurisdiction for purposes of prosecution.Below is the Disciplinary Committee’s decision on the case. The full decision has been sent to Prisons Ladies FC:

2. The Club is ordered to produce the assaulter identified as belonging to the Club within 7 days from April 23 2019 before the police station with jurisdiction for the purposes of prosecution.  The Club shall accordingly file to the GFA a written report of compliance with this order not later than May 2, 2019.

3. The Club shall be liable to a further sanction of 2 home match ban in any competition of the GFA anytime from the date of this decision, upon failure to fully comply with the orders herein.

4. On the player and team masseur (the accused) are acquitted and discharged on all counts. Though the Disciplinary Committee finds that their testimonies were not credible and full of inconsistencies, they are acquitted on procedural technical grounds particularly because of a patent defect in the charge preferred by the Prosecutor and also that it has not been proved beyond doubt that they were directly involved in the assault.

That notwithstanding, the fact of the assault and the involvement of persons associated with the club is positively established by the evidence adduced before the Disciplinary Committee including documentary evidence by way of the exhibits and official reports.