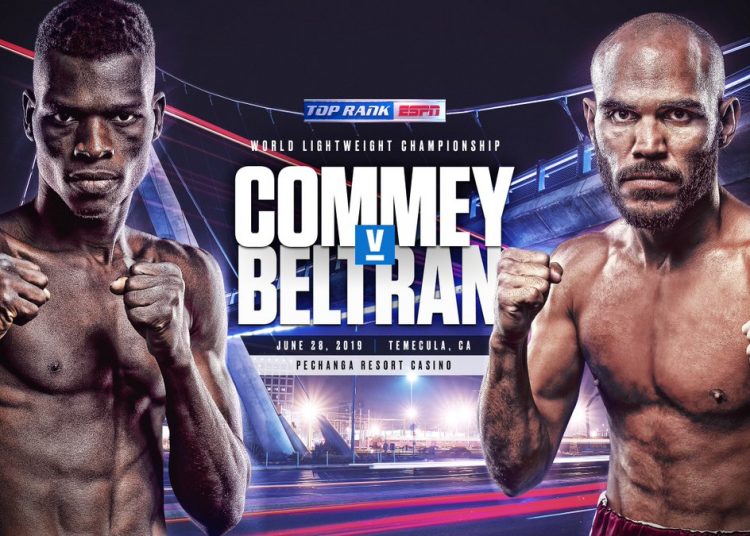 The fight, in the works for the past few weeks, will take place on June 28 at the Pechanga Resort Casino in Temecula, California.

Commey won a vacant world title by second-round knockout of Isa Chaniev on Feb. 2 at the Ford Center in Frisco, Texas. There was already a deal in place for the winner to face pound-for-pound king Vasiliy Lomachenko in a title unification bout. However, Commey injured his right hand in the victory and was unavailable for Lomachenko’s next defense, which was already scheduled for April 12.

While Commey healed, Lomachenko knocked out Anthony Crolla in the fourth round and next will face Luke Campbell for a vacant title, looking to add it to his other two belts. So Commey will instead defend against Beltran, with the winner likely to face 2018 ESPN prospect of the year Teofimo Lopez Jr. in the fall. That winner will probably face Lomachenko, if he beats Campbell, for the undisputed title. Lopez also has to get through a title eliminator against Masayoshi Nakatani on July 19.

“I’m honored to be headlining an ESPN show as a world champion and to be fighting former world champion Ray Beltran, whom I have the utmost respect for,” Commey said. “This is an opportunity for me to show the American public that I’m here to become the undisputed lightweight champion of the world. The path is set, and come June 28, I’ll be ready to rock ‘n’ roll.”

Lou DiBella brought on Top Rank to co-promote Commey hoping to help him land a title fight and high-profile bouts.

“We’re thrilled that his first defense will be a high-profile fight against tenacious former world champion Ray Beltran,” DiBella said. “Richard wants to be a unified champion and a star. On June 28, he has an opportunity to raise his profile worldwide.”

In Beltran’s fourth chance to win a world title, he finally did it in February 2018, winning a hard-fought decision over Paulus Moses. But in his first defense in August, Beltran lost a unanimous decision to Jose Pedraza, who later lost the belt to Lomachenko in a unification bout.

But Beltran bounced back with a strong performance against Hiroki Okada in February, dropping him three times en route to a ninth-round knockout victory to make himself viable for another title opportunity.

“I’m excited about this fight with Richard Commey,” Beltran said. “I’ve been the WBO champion, and I intend to be the IBF champion on June 28. I expect a tough fight, but that’s the kind of fight I like. We are both very experienced, so it will come down to who is willing to lay his heart on the line that night. After losing my title to Jose Pedraza, I think some people thought I was done, but I always come back and prove that I belong.”

Beltran, a former longtime sparring partner for Manny Pacquiao, will go into the fight having reunited with trainer Freddie Roach.

“I’m excited to announce that Freddie Roach is back in my corner after all these years. When I was working with Manny Pacquiao, I saw what Freddie can do, both in camp and in the corner,” Beltran said. “I’m grateful to Top Rank and ESPN for having me back. The only thing I want for my birthday (on July 23) is the IBF world title.”