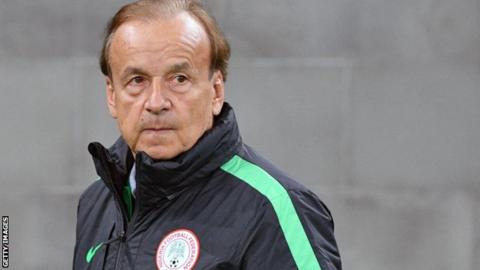 Head Coach of Nigeria’s Super Eagles, Gernot Rohr, has taken a swipe at Morocco trainer Herve Renard, playing down his side’s favourites tag ahead of the AFCON in Egypt.

Renard identified the 3 time champions, who have been drawn in group B along with Guinea, and debutants Burundi and Madagascar, as one of the strong candidates for the ultimate prize.

Despite posing one of the best squads in the competition coupled with being number 4 on the continent in the FIFA rankings, Rohr says it will be stupid to pit his side as favourites for the competition.

“Morocco are the main favourites for the competition. Senegal, Tunisia and hosts Egypt, who have the best player on the continent, are also huge favourites.

“We know what we have to do, but we will stay humble. To declare that we will win the AFCON will be stupid. We have a blend of youth and experience, so we have to work hard to do that,” he said.

“This squad is not as talented as the great Nigerian teams of the past, but that does not mean i don’t trust my team. I trust my team, and we have a chance to go far, but we have to stay humble.”

Nigeria will be making a return to the competition for the first time since winning their 3rd crown in 2013, after missing out on the 2015 and 2017 editions.