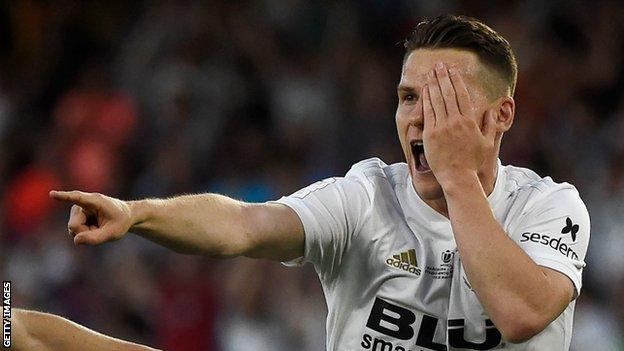 Ernesto Valverde’s men said in the build-up that a win would help ease some of the pain of the Champions League loss to Liverpool, but they were sub-par again, in the Seville heat.

French forward Gameiro fired in a superb strike to give Valencia the lead before Rodrigo headed in the second.

After the match, Barcelona president Josep Maria Bartomeu backed Valverde to continue at the Nou Camp.

“I’ve always said that Ernesto has a contract for the next season, he’s the coach,” he said.

“I do not think this defeat is the coach’s fault.”

Valverde said: “When a coach loses you want to go again, to fight to overcome the next challenge. I know losing for this club is hard.”

Temperatures reached north of 30C inside Real Betis’ packed Estadio Benito Villamarin, but only one side wilted.

There was a sign of things to come when, in the eighth minute, Barcelona defender Clement Lenglet was lucky to escape being punished for a woeful pass.

His ball along his own area was picked up by Rodrigo, but fortunately for the Frenchman his centre-back partner Gerard Pique was on hand to clear the Spain international’s shot off the line.

However, there was no stopping Gameiro’s opener following good work down the left from Jose Gaya. The left-back picked out the French striker just inside the area, who then launched a full-blooded drive high past the reach of Jasper Cillessen.

Twelve minutes later it was 2-0. Rodrigo, who caused plenty of problems for Barca’s backline, timed his run into the six-yard area perfectly to nod home Carlos Soler’s cross.

Messi, who does have a habit of easing himself into games, tested opposition keeper Jaume Domenech for the first time just before the break before his full abilities came to the fore after the break.

The Argentine had one shot, with the outside of his boot, come off the post before he forced Domenech into making a stunning one-handed save.

Messi finally found the net with his 28th goal against Valencia in all competitions. Pique’s header from a corner rebounded off the post and the number 10 tapped in from close range.

The expected onslaught in the final 15 minutes never materialised with, instead, Valencia’s Goncalo Guedes twice going close to scoring a third for his side.