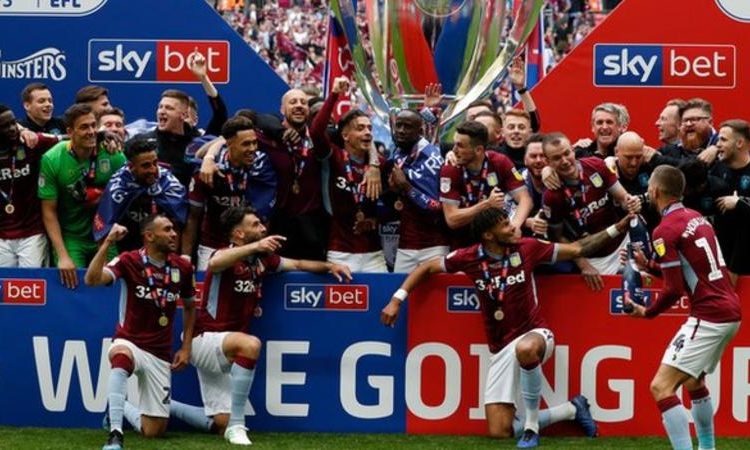 Aston Villa held off a late fightback from Derby County to win promotion back to the Premier League with victory in the Championship play-off final.

Villa, beaten by Fulham in last season’s final, seemed to be cruising to victory when John McGinn added to Anwar El Ghazi’s first-half strike to put them 2-0 up with 30 minutes to go.

However, Rams boss Frank Lampard threw caution to the wind and his side set up a frantic finale when substitute Jack Marriott’s effort from eight yards took a deflection off Martyn Waghorn on its way in.

Despite seven minutes of injury time they could not force an equaliser and now face another season in the second tier, while Villa return to the Premier League for the first time since relegation in 2016.

Promotion at Wembley caps off a remarkable three months for Villa who had looked out of the promotion race before a club-record 10-match winning run saw them finish fifth.

Perhaps unsurprisingly given the value of the game, estimated to be a minimum of £170m, the first half was a cagey affair.

Rams midfielder Mason Mount was the first player to register a shot on target when he fired straight at Villa keeper Jed Steer from 20 yards late in the half.

With the game drifting towards the break goalless, Dean Smith’s side launched a quick attack that El Ghazi finished off by coming in on the blindside of the static Jayden Bogle and diverting it into the net with his back.

They doubled their advantage when Rams goalkeeper Kelle Roos misjudged the flight of a deflected El Ghazi shot and McGinn beat him to it to head into an empty net.

That sparked Derby into life and they grew into the game before the combination of forwards Marriott and Waghorn got them back in it.

But it was not enough though and they now face a 12th successive season in the Championship.

What next for Rams… and Lampard?

Derby reached the play-offs in dramatic fashion, with two goals in the final 30 minutes of their final league game of the season against West Brom giving them the win they needed to guarantee sixth position.

More drama was to follow in their semi-final against Leeds United, when the Rams became the first team in second-tier history to recover from losing the first leg at home to go on to reach the final, as they fought back to win an incredible match 4-2 at Elland Road.

Their build-up to the Wembley showpiece was in danger of being disrupted as rumours grew about boss Lampard leaving to replace Maurizio Sarri as Chelsea manager.

The former England international said he would discuss his future with Rams owner Mel Morris after Monday’s match regardless of the result and it remains to be seen if he will be at Pride Park next season.

The East Midlands side, who also lost out in the 2014 Championship play-off final to QPR, failed to threaten the Villa defence until they had gone 2-0 down.

They will surely be left to wonder ‘what if?’ after a spirited last 10 minutes nearly saw them grab a leveller to send the game to extra-time.