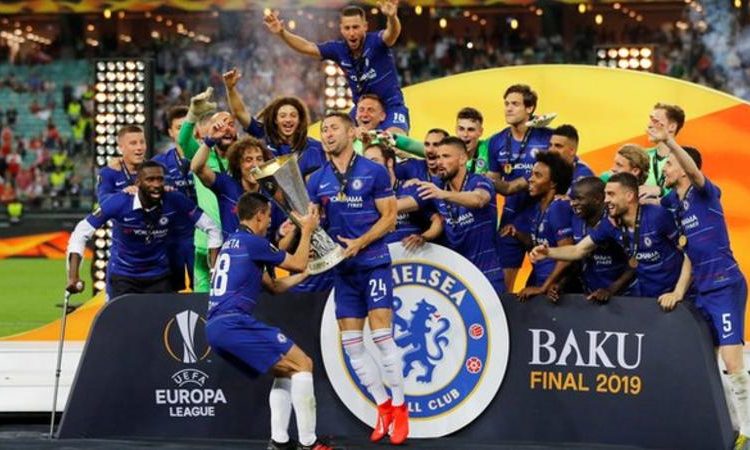 Eden Hazard scored two goals and made another to help Chelsea thump London rivals Arsenal in Baku and win the Europa League.

Victory gave Blues boss Maurizio Sarri the first trophy of his managerial career and ensured the Gunners will miss out on next season’s Champions League.

With only about 5,000 fans from both sides able to make it to Azerbaijan, there was an eerie atmosphere at the Olympic Stadium in Baku, which appeared less than half full.

That was the surreal setting for a match played 2,500 miles away from both teams’ home, and the game itself was devoid of action before the break before bursting into life early in the second half.

Cech, also facing his old side and playing the final match of his career, could do nothing about Chelsea’s second goal either, with Pedro sweeping home a Hazard cross.

Hazard made it 3-0 from the penalty spot soon after, sending Cech the wrong way after Ainsley Maitland-Niles fouled Giroud.

But Hazard quickly made sure of victory, playing a one-two with Giroud and firing home Chelsea’s fourth goal.

The Belgium forward said after the game it was likely to be his Chelsea “goodbye” as he continues to be linked to Real Madrid.

Chelsea’s triumph brought them their fifth European title and their first since they won the Europa League in Amsterdam in 2013.

An emotional Sarri celebrated with his players on the pitch, but his future remains in doubt despite ending his first season at Stamford Bridge on a successful note.

Hazard’s departure appears rather more certain, and his performance ensured this game will be at least partly remembered for footballing reasons, after being overshadowed beforehand by politics, plus travel and ticketing issues.

The Chelsea fans who did make it to the game – via train, plane and even taxis – were rewarded by a typically effervescent display from a player who has sparkled for them over the past seven years.

Giroud deserves credit too, particularly for his finish for the opening goal that led to Arsenal’s collapse.

But it was Hazard who made the difference, as so often this season and in previous years.

If he does go, the question is who will replace him?

Cech signs off with painful defeat

While Sarri was able to end his troubled first season with a smile, Arsenal counterpart Unai Emery had to watch in horror as his hopes of leading his side back into the Champions League after a two-year absence disappeared in the space of 16 second-half minutes.

That was how long it took Chelsea to build an unassailable three-goal lead thanks to the kind of Arsenal defensive collapse that has been all too familiar this season.

Emery won this competition three times with Sevilla but this defeat is particularly painful as it will almost certainly significantly affect his summer spending.

The Gunners will be back in the Europa League again next season, but they will be without veteran goalkeeper Cech, who is set to retire at the age of 37.

This was not the fairytale ending his glittering career arguably deserved, but Arsenal’s capitulation was nothing to do with him.

There was little he could do with any of Chelsea’s goals from open play, let alone the penalty, and he actually helped to limit any further damage with some impressive late saves.