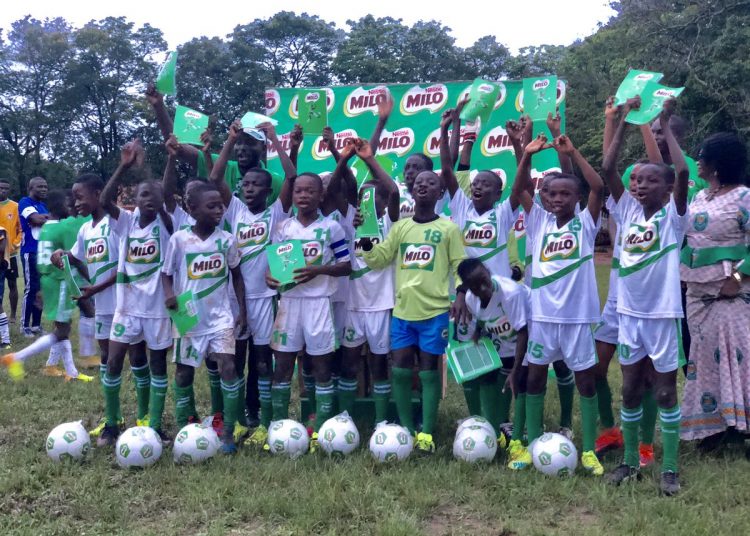 It was the turn of Great Accra, Eastern, Volta and the Oti Regions to have their crack at the competition and have representatives for the National finals to be held at the Paa Joe Park in Kumasi.

With the national defending champions coming from this zone, it was always going to be a mouthwatering zonal competition – Redeem D/A Primary from the Oti Region won the national championship in 2018.

It was the turn of the Technical Director of the Ghana Football Association, coach Oti Akenteng, the former striker of the Black Stars, Augustine Arhinful and Assistant coach of the female U17 team, coach Baba Huhu Mallam to take the kids through the soccer clinic.

The soccer clinic was geared towards equipping and helping the kids through drills, dribbling, teamwork and agility test – with high expectations, the clinic commenced with over 600 non-participating schools in and around the Kpando community.

The 16 participating schools were taken through validity checks by the director of PE of the Ghana Education Service, Mr. Emmanuel Dormenya, on the eve before the championship kicks off.

The regional groupings were done with two fields required for the first day’s activities. Kpando Technical and Bishop Herman College were respectively used for the competition.

Group standings after the first round of games were played at both venues to determine those making the next phase of the competition;

Nkawkaw Methodist from the Eastern Region, Akweiman D/A from the Greater Accra, Wusuta D/A from the Volta Region and Krasec L/A Primary from the newly created Oti Region completed the top four teams for the semis – all four automatically makes it to the national championship to be held in Kumasi.

A zonal champion had to be determined and after the draws; it was Nkawkaw Methodist against Krasec L/A while Akweiman D/A were scheduled to face Wusuta L/A Primary from the Volta Region.

It took the penalty shootout to determine the winner in the first semis between Nkawkaw Methodist Primary and Krasec L/A. It was a masterpiece of a game between the two sides as they both had a go at each other before the final whistle and it was Nkawkaw Methodist that won the shootout 5-4

Akweiman D/A and Wusuta L/A took the centre stage for the second semifinal game and it turned out that the Greater Accra side was too strong for their Voltarians on the day. Akweiman D/A brushed aside Wusuta via a 3-0 result to play in the Zonal finals against the Eastern Regional Champions, Nkawkaw Methodist.

Rain almost ruined the grand finale as it poured down heavily after the presentation of jerseys but this didn’t stop the game from coming off as planned.

The BIHECO pitch became too soggy for the finals after the rains and therefore, the KPANTEC pitch was to host the finals. It wasn’t as expected but it was not short of excitement as both played their hearts out despite the cold nature of the weather and watery pitch.

Goals in both halves from Jonathan Edwards and Nelson Twum, the captain for Nkawkaw Methodist secured the Eastern Regional champions the zonal title.

All is now set for the National Finals of the Milo Under 13 Champions League to be staged at the Paa Joe Park in Kumasi.

Below are the details of the participating schools:

NC Special: Grant 'proud' of Hearts despite losing to Kotoko