The Black Stars of Ghana have just qualified to the Round of 16 of the 2019 Africa Cup of Nations. 2-0 victory over Guinea Bissau in Suez and top of Group F, unbeaten in three matches.

“People always talk when things don’t seem to be going the way they want, but I’ve always believed in this team,” head coach Kwesi Appiah said at the post match press conference. But only he believed his own words. Not many Ghanaians, going into this evening’s game especially, believed Ghana would qualify top of the group. Rightly so. After all, with no win in their opening 2 matches, qualifying at all would be a miracle.

But this is Appiah’s team. He knows how to move his pieces around his chess board. After a poor first half, he switched things up and Ghana’s game began to function, like an axle in between wheels. Kwesi Appiah inspired that second half performance with his changes. But he will never get credit for it. Questions are however being asked on why he doesn’t start with the system he finished the game with.

“Each game has its own characteristics and requires different approaches at different times,” Appiah said in response to whether an Afriyie Acquah and Mubarak Wakaso double pivot will be employed for future games.

He is the coach, he makes the decisions. And so far, Appiah’s choices have guided Ghana to the top of a difficult Group F, something his counterparts; Gernot Rohr of Nigeria, Aliou Cisse of Senegal and Ibrahim Kamara of Cote d’Ivoire have failed to do. Some of those countries have arguably better players, or players in better form.

This deserves commendation; instead, Appiah has remained the most vilified man in Ghana in the last few days.

The vitriol reached crecsendo after the draw against Cameroon. When I put up a quote from Appiah on tactics deployed against the defending champions, the amount of abuse in the comment section forced me to mute the conversation. It was unimaginably disrespectful and appallingly ignominious.

While it is permissible to criticize the decision of head coaches everywhere, what has often been thrown in the direction of the former Ghana captain is anything but criticism. It’s mostly been sheer abuse, communicated with asperity of prohibitive degrees.

When you handle a national team like the Black Stars, criticism is often collateral damage that comes with it. The ability to receive it is almost a requirement for the job. And I think Appiah understands that and takes it all in good faith.

But a quantum of the criticism, if we can call it that, Appiah has received has been unwarranted, unjustified and quite frankly baseless. In the midst of it all, people have been quick to join the bandwagon, downplaying every single decision of Appiah, even though some of his moves have been genius.

Take the 2-2 draw against Benin for example. With a man sent off very early in the second half, Appiah’s team re-organized, kept their shape and still looked the more dangerous of the two teams. In the 35 degree heat in Ismailia, you don’t need Einstein to tell you that the Ghanaian players were bound to run out of steam as they exerted more energy than their opponents.

So on the 90th minute, Appiah having realized his players were gassed, brought on Afriyie Acquah to help contain the late Benin onslaught. After all, with 4 minutes of injury time to play, playing to get a point was the wisest thing to do. Why risk everything in injury time with tired players and have a point stolen away with a last minute sucker punch?

But no, he was lambasted for being a coward; for playing for a draw instead of throwing everything forward in search of a win. That sort of stupid bravery would have been costly. Appiah did the right thing and Ghana got a point. Under the circumstances, the joke is really on anyone who thought Appiah was tactically outdone against Benin.

Step in Ghana vs Cameroon, Ghana’s best game in the competition so far. Anybody with a tactical eye would have noticed the massive improvement from the Benin game. Ghana struggled against Benin’s 3-4-3/5-4-1 formation by not moving the ball quickly enough and not creating enough width. Appiah had watched the Cameroonians who usually deployed a similar system. In fact, Cameroon coach Clarence Seedorf hinted in his pre-match press conference that they would look to keep it tight. And that’s exactly what he did, packing the midfield and defense in a two block defensive set up.

What does Appiah do? He plays Baba Rahman at left back to create more width. This was justified as the Chelsea man whipped in great crosses that could have resulted in goals had the connection from Jordan Ayew been better. Execution is down to the players, not the coach. Appiah’s job ends when the sequence results in a chance. It’s the players’ job to finish off the opportunity. Ghana created chances. They just didn’t finish them off. That’s not Appiah’s fault.

Admittedly, the deployment of Kwadwo Asamoah on the left side of midfield created problems as the two players, at times, crowded out each others’ spaces. But defensively, it was a necessary move; one that ensured Ghana wasn’t hurt by Christian Bassagog. Bassagog has caused damage to Ghana in the past. In 2017, he ran Ghana’s left back, Frank Acheampong rugged.

Didi Dramani, who scouted the Cameroonians, later admitted to me, that Asamoah executed his job superlatively. And Kwesi Appiah reaffirmed that in a later interview.

And it’s not just Kwadwo Asamoah. Tactically, Ghana were better organized, more cohesive against Cameroon than they were against Benin.

Here is a fantastic twitter thread on Ghana’s tactical organisation against Cameroon. Go through that and see if you still find Appiah dumb or clueless.

Despite drawing 0-0, Ghana's game v Cameroon represented a welcome improvement over their clash with Benin. The system seemed to function relatively well, defensively there was a clear plan & it even seemed there had been work done on set pieces (THREAD STARTS HERE)

Thomas Partey, who was generally criticized for doing “nothing” against Cameroon, put in a much better shift in that game than he did against Benin. Admittedly, Partey is having a below par tournament by his own standards. But the reason we have come to expect so much from him in the national team, is because of Kwesi Appiah, who helped him thrive in Ghana colors.

Compare his heat maps for the two games: 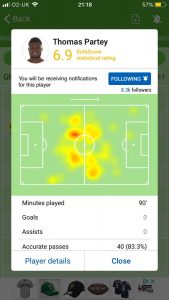 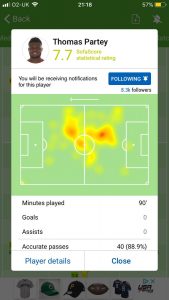 When Kwabena Owusu came off the bench to put in a creditable shift, instead of praising Appiah for introducing a chap many in Ghana had never heard off, he was berated for bringing him on late. Yes, I was one of those. But sometimes, that’s the best time to throw in a new player, with adrenaline pumping and not a lot of time to ponder the occasion. And it very nearly paid off. In the next few years, Kwabena might become a mainstay in the Black Stars team. And everyone would remember the day Appiah gave him his debut. That would be hindsight credit to Appiah. He will not be needing it then. He needs that now.

Unless you are intentionally refusing to see it, Kwesi Appiah is securing the future of the Black Stars with his choice of call ups. Just like he did during his first spell with the Black Stars when he introduced the likes of Christian Atsu and Mubarak Wakaso to the team, Appiah is slowly building a new Black Stars core – Samuel Owusu for Christian Atsu, Kasim Nuhu for Jonathan Mensah, Joseph Aidoo for John Boye. Appiah could be sacked in a few months, but there will be no doubt he would have introduced a new crop of players to the national team.

Avram Grant was in charge for two AFCON spells. He left the same team behind; aging and stale.

When Appiah said at the pre-match press conference ahead of the Cameroon game that it was important to also consider the future of the team when making player selections, he was called clueless. But on the face of the evidence, he was spot on and deserves accolades for his visionary position.

Appiah has been blamed for every miss, offside and misplaced pass. It’s all Kwesi Appiah’s fault as far as some Ghanaians are concerned.

You can criticize the coach. Criticism is a fundamental facet of modern society. But when you do criticize, make it decorous and constructive. Make sure you’ve thought deep about what you’re about to say or tweet or post, and ask yourself – is it really Appiah’s fault?