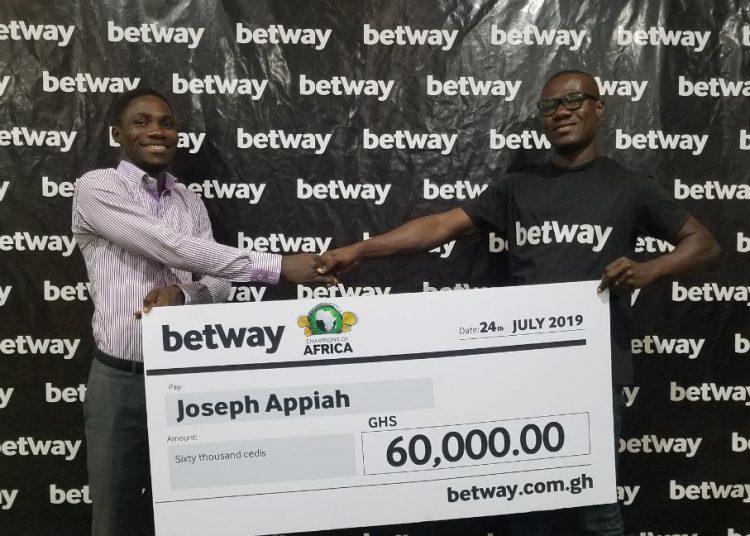 Joseph Appiah, a twenty-three-year-old teacher from Kuntunse in the Ashanti Region, walked away with GHC 60,000 in the AFCON Predictor Promo which was run during the 2019 AFCON tournament.

He accrued the highest exact predictions with a total of 130 to emerge as the winner of the promotion. The promotion which run from 22nd May 2019 until 19th July 2019 offered Betway players an opportunity to predict the result of each fixture in the 2019 AFCON tournament for free. Each prediction earned the player points on the overall leaderboard.

Ghana’s leading online sports betting provider, Betway, on Wednesday 24th July 2019 presented the prize to the winner at their Concept Store at Amakom in Kumasi.

An excited Joseph Appiah said “When I received a call from Betway, I was extremely excited and could not believe I was the winner of the promotion. I kept on screaming and dancing at my compound. The call from Betway was timely and I intend to support my dad’s building project with this money.”

Joseph Appiah joins a league of lucky winners who have won prizes from the promotions being run by the leading online sports betting company. Ishmael Nyame won a fully paid trip to the United Kingdom to watch West Ham play against Arsenal whilst Ransford Adika Senanu won a brand new Kia Cerato.

About the Betway Group

The Betway Group is a leading provider of first-class entertainment across sports betting, casino, bingo and poker. Launched in 2006, the company operates across a number of regulated online markets and holds licenses in the UK, Malta, Italy, Denmark, Spain, Belgium, Germany, Kenya, Uganda, Ghana, South Africa and Nigeria. Based in Malta and Guernsey, with support from London, Isle of Man, Stockholm and Cape Town, the Betway team comprises over 1,000 people.