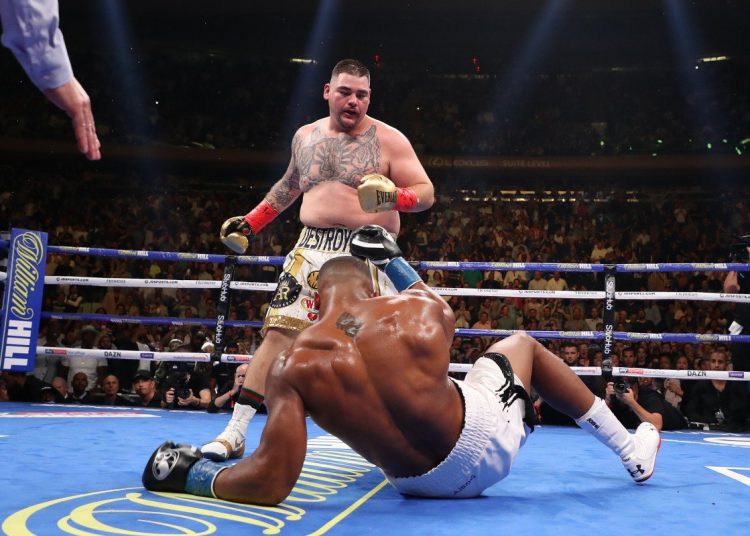 The rematch between unified world heavyweight champion, Andy Ruiz and Anthony Joshua will not happen in the United Kingdom according to the titleholder.

The rematch is contractually expected to happen between the duo in Briton.

According to Joshua’s promoter, Eddie Hearn, the Cardiff’s Principality Stadium was the “frontrunner” venue for the return bout.

However, Ruiz has debunked the assertion that the fight between himself and the British boxer will not happen in the UK.

He said on the Joe Rogen’s Experience “That’s not going to happen” when asked the possibility of the match being held in the United Kingdom.

He added: “We have been going back and forth, my team and their team. I’d love to have it back at Madison Square Garden to run it back.

“The Staples Center [Los Angeles], Las Vegas would have been great too.”

Ruiz, 29, has also cleared the air on the likelihood that the fight will not happen to say on the emphasis that the bout will “definitely” happen this year.

“I don’t think we will be changing too much,” he added. “Just exactly what we did for the last one is what we will be doing, just more intense.

“I’m willing to fight anybody, as soon as I win the rematch. Tyson Fury, Deontay Wilder – anybody.”

American-born Ruiz, who fights under a Mexican flag as a result of his heritage, says he has watched the fight “about 30 times” and revealed his life has transformed since the win.

“A lot of people didn’t know we were struggling a lot even before this fight,” he said. “I was with Top Rank [promoters] and not getting a lot of fights.

I had one more fight left with them and they didn’t want to let me go so I had to pay the contract off. Everything turned around so quickly.

“From having nothing to wanting something in life is big motivation, especially me – I have five kids.

It feels nice getting the stuff I always wanted, seeing famous people having nice stuff, now I can get it for myself, my family, kids, and mother.”