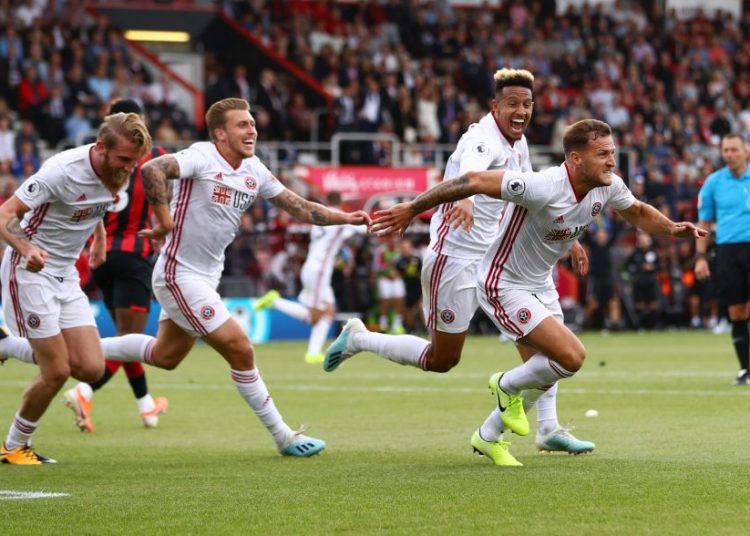 Billy Sharp scored Sheffield United’s first Premier League goal in 12 years as the newly-promoted Blades earned a point on their return to the top-flight.

The 33-year-old striker continued where he left off last season – when he netted 23 times – with his late strike securing Sheffield United a 1-1 draw against Bournemouth.

Chris Wilder’s visitors, back in the top flight for the first time since 2007, looked set to leave the Vitality Stadium empty-handed after defender Chris Mepham’s first Cherries goal.

But Sharp, a boyhood Blades fan, scrambled home from close range following a well-worked free-kick routine just six minutes after coming on as a substitute.

Wantaway winger Wilfried Zaha came off the bench for Crystal Palace as they played out a 0-0 draw with his suitors Everton in a Premier League clash at Selhurst Park.

The visitors were reduced to 10 men following Morgan Schneiderlin’s second-half dismissal but created the better chances to secure an opening-day victory – only for both sides to have to settle for a share of the spoils.

Burnley scored three goals in 12 second-half minutes to get their Premier League season off to a flying start with a 3-0 victory over Southampton at Turf Moor.

The Clarets, who struggled to recover from a poor start to the last campaign, did not have a shot on target until Ashley Barnes netted the opener in the 63rd minute.

He then scored again with their second seven minutes later, with new signing Erik Pieters the creator on both occasions, and Johann Berg Gudmundsson grabbed the third in the 75th minute.

Graham Potter’s new-look Brighton recorded their first win in five trips to Vicarage Road with a comfortable 3-0 win over Watford.

In Potter’s first competitive game in charge of Albion, his side took the lead in the 29th minute after a ball across the box from Pascal Gross was turned into his own net by Abdoulaye Doucoure.

As Watford looked for the equaliser in the second half, Brighton struck again with substitute Florian Andone (65) firing home with his first touch of the ball after coming on just one minute previously.

The three points were sealed when fellow debutant Neal Maupay expertly rounded Ben Foster in the Watford net before tapping home in the 77th minute.