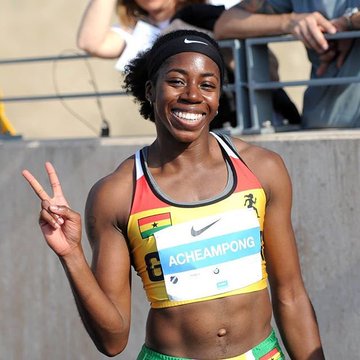 It was a perfect score for Ghanaian athletics on Day 7 of the 2019 African Games in Morocco as all FIVE athletes who took part in their heats earlier on Thursday progressed to the next stages of their respective races.

In the women’s 100m heats, Persis William-Mensah came second in a time of 11.76 seconds in Heat 1 to make it to the next round. South Africa’s Tebogo Mamathu was first in a time of 11.55 seconds while Sibonakele Ndzinisa of Eswatini was 3rd with a time of 11.89 seconds.

In heat 5, Gemma Acheampong was 3rd in a time of 11.83 seconds. She finished behind Nigeria’s Aniekeme Alphonsus who had a time of 11.67 seconds and Gina Bass of The Gambia whose time was 11.38 seconds.

In the men’s races, Sean Safo-Antwi came second in his heat in 10.51 seconds. South Africa’s Thandolwenkosi Dlodlo was first after crossing the line in a time of 10.37 seconds. Methukhela Makusha of Zaimbabwe was 3rd in 10.56 seconds.

Joseph Amomah followed Safo Antwi’s lead and also finished second in his heat in 10.28 seconds behind Nigeria’s Ese Itsekiri who had 10.27 seconds. Cote d’Ivoire’s Arthur Cisse was 3rd with 10.30 seconds.

Kwaku Azamati also finished second in his heat behind Nigeria’s Raymond Ekevwo. Azamati recorded a time of 10.32 seconds while Ekevwo had a time of 10.20 seconds. Bruno Matsenjwa of Eswatini was third with 10.54 seconds.

In the men’s opening round of the badminton event, Michael Baah defeated Mouin Wahali of Tunisia 2-0 and Daniel Sam also prevailed against Ouzaier Khayati of Tunisia in two straight sets.

Ebenezer Andrews kept the winning streak going with a 2-0 win over Mutombo Tshizanga of DR Congo.

However, Ghana’s Emmanuel Botwe lost 2-1 to Fantahune Abay of Ethiopia.

Derek Abrefa and Felix Lartey defeated Salim Karam and Mounaim Tirselt of Morocco 3-2 to win their men’s doubles round of 16 match.