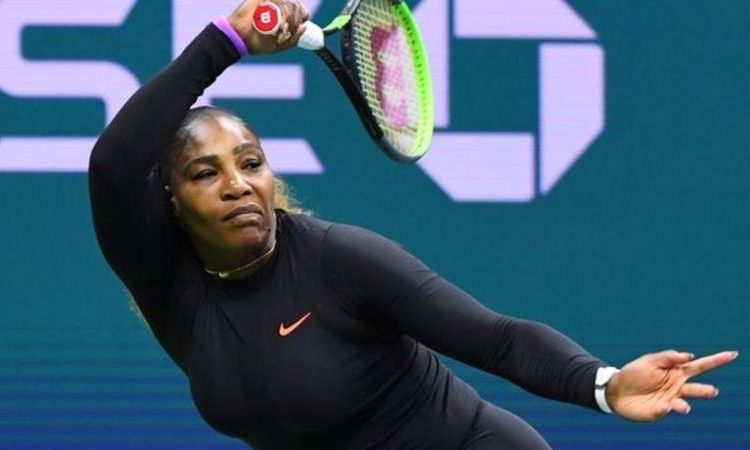 Serena Williams made the perfect return to the US Open after last year’s controversial final by thrashing her long-time rival Maria Sharapova.

Twelve months ago, Williams called the umpire “a cheat” and “a liar” during her loss to Naomi Osaka.

But the mood was rather different as she beat the 32-year-old Russian for the 19th time in a row.

Eighth seed Williams, who is bidding for a record-equalling 24th Grand Slam title and a first since returning from giving birth two years ago, broke Sharapova’s serve five times as she eased into a second-round meeting with fellow American Catherine McNally.

When asked about the decision not to allow Portuguese umpire Carlos Ramos to officiate her matches in New York following their infamous row, Williams said: “I do not know who that is.”

From the moment Williams and Sharapova were drawn against each other on Thursday, the latest meeting between two of the biggest names in the sport was the main talking point of the first round at Flushing Meadows.

World number one Osaka said she was going to “set a timer” to make sure she did not miss the match, while 20-time Grand Slam champion Roger Federer added he would be watching while he warmed up for his opener which followed on Arthur Ashe Stadium.

The arena barely had an empty seat for the opening night session of the tournament, with former world heavyweight champion boxer Mike Tyson and Hollywood actor Alec Baldwin among the 24,000 fans.

Williams and Sharapova have had a frosty relationship since they first met on court in 2003, although the American said before they were due to meet at the French Open last year – a match which she then pulled out of with injury – that she did not have any “negative feelings” towards the Russian.

In truth, it has not been much of a rivalry on court in recent years, Williams having won 19 of their 21 previous meetings and both of Sharapova’s wins – including the Wimbledon final – coming back in 2004.

In their first meeting since the 2016 Australian Open, it was a familiar struggle for Sharapova who has struggled with a long-standing shoulder injury and slipped down the rankings to 87th as a result.

Williams, moving well and showing few signs of a recent back problem, out-powered her from the baseline and wrapped up the first set in just 25 minutes.

Sharapova was broken in the first game of the second set before increasing the intensity of her groundstrokes to force two break points in the fourth.

But a poor return and a wonderful winner from Williams allowed the home favourite to recover – and the inability to break back sealed Sharapova’s fate.

Williams took her serve in the next game for a 4-1 lead and, after fighting off three more break points, sealed victory when Sharapova hit a backhand long as she ended the match without winning a single point on her second serve.

“That winner at 3-1 in the second set was a big point for me. She’s the type of player who can get momentum so I was really excited I could get the winner,” Williams added.

“Obviously, I’m going against a player who has won five Grand Slams and reached the final of even more so I knew it would be tough.

“I was super intense and super focused because it was an incredibly tough draw.

“Whenever I come up against her I play my best tennis.”