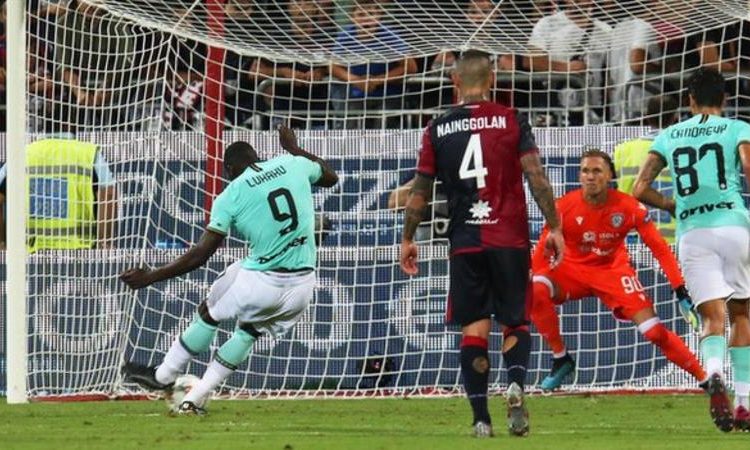 Inter Milan striker Romelu Lukaku was racially abused by Cagliari fans as he scored from the penalty spot to give his club a 2-1 victory in Serie A.

He is the latest black player to suffer abuse from Cagliari fans, prompting calls for action to be taken.

Lukaku, 26, stood and stared at fans behind the goal – where monkey chants had come from – after scoring.

The fans’ actions were condemned by Inter defender Milan Skriniar in a post-match interview. “There are things that must not be in football,” he said, according to La Gazzetta dello Sport.

However, when Inter boss Antonio Conte was asked about the chants, he said: “I really didn’t hear anything from the bench. However, it is true that in general in Italy more education is needed.”

Belgium international Lukaku, a £74m signing from Manchester United in the summer, was playing in his second game for Conte’s side at Cagliari’s Sardegna Arena.

Last season Everton’s Moise Kean suffered similar abuse when playing against Cagliari for Juventus. But the incident became a bigger issue when Juventus boss Massimiliano Allegri and defender Leonardo Bonucci appeared to suggest Kean should take some of the blame for the way he celebrated scoring a goal.

Serie A decided not to sanction Cagliari for their fans’ racism – despite admitting their actions were “reprehensible”.

The previous year Cagliari fans were called out after abusing another Juventus player in Blaise Matuidi – but Italian football chiefs did not take any action.

In 2017, Pescara midfielder Sulley Muntari walked off the pitch after being racially abused by Cagliari fans – but was subsequently banned by football authorities for his protest.

Cagliari was heavily criticised on its social media channels but the club has not yet addressed Sunday’s abuse.