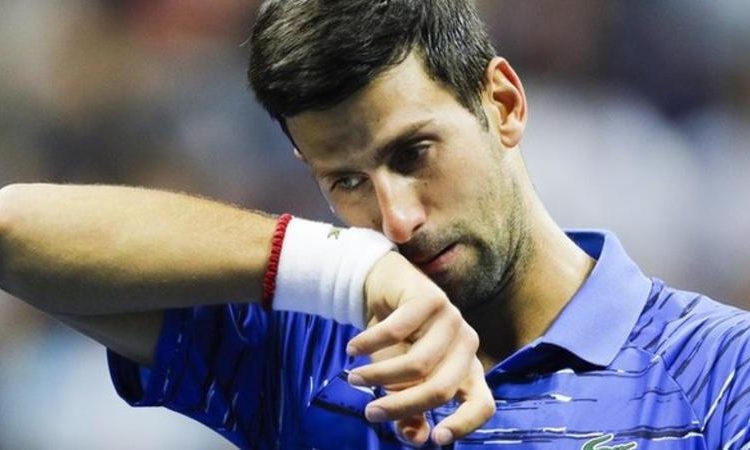 Djokovic retired for the sixth time in a Grand Slam match and the 13th time in his career (Image credit: AP)

Defending champion Novak Djokovic is out of the US Open after quitting because of injury against Swiss 23rd seed Stan Wawrinka as defeat loomed in an electrifying fourth-round match.

Djokovic, 32, retired with a shoulder problem seconds after a double fault left him two sets and a break down.

Loud boos greeted the Serb’s decision, with more heard as he walked off court.

“I’m sorry for the crowd. They came to see a full match but it wasn’t to be,” said world number one Djokovic.

Three-time Grand Slam champion Wawrinka had dominated the last-16 contest in a boisterous atmosphere at Arthur Ashe Stadium, producing a powerful display reminiscent of his best to lead 6-4 7-5 2-0, when Djokovic decided he could not continue.

Djokovic was the hot favourite to retain his title at Flushing Meadows and earn a 17th Grand Slam title which would move him closer to Roger Federer (20) and Rafael Nadal (18) in the race to be deemed the greatest men’s player of all time.

But he had been hampered throughout the tournament with a left-shoulder injury, which he says has left him in “constant pain for a few weeks”.

Before his next match against American Denis Kudla, there had been speculation he might withdraw because of the problem, only to show few signs of the issue in a comfortable win on Friday.

But Djokovic said the intensity of the pain returned against Wawrinka.

“It is very frustrating. Of course it hurts that I had to retire,” said the Serb.

“Some days the pain has been higher, some days with less intensity. Obviously I was taking different stuff to kill the pain instantly. Sometimes it works, sometimes it doesn’t.

“You just know when you know, when you feel like you’re not able to hit the shot any more.”

Djokovic did not want to discuss the near 24,000 crowd’s reaction to his early exit, while Wawrinka said he was surprised by negativity.

“If he has to retire, it’s not the best for a tennis player to have to leave the court like that.”