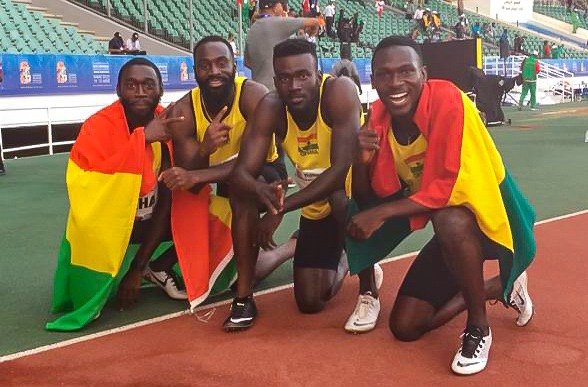 Share on FacebookShare on TwitterShare via Whatsapp
The Ghana Athletics Association has issued a statement expressing its gratitude to the members of the athletics team that excelled during the 2019 African Games in Morocco and the various entities and individuals who played various roles in the success of the team and the general development of the sport in the country.
The athletics team gave Ghana four medals in total during the games.
The men’s 4×100 relay team won gold, Rose Yeboah won gold in the women’s high jump while Deborah Acquah picked up a silver medal in the women’s long jump and Grace Obour won bronze in the women’s 400m.
Below is the statement from the GAA:

“The Ghana Athletics Association (GAA) congratulates Ghana’s athletes and coaches for the gallant display that saw Team Ghana register among the medal-winning nations at the 2019 African Games.
It took so much effort, both before and during the Games, and despite limited resources and the unbelievable stress from various arenas that GAA and the athletes were under in the very recent past.
First and foremost, it is the athletes who competed in Rabat who deserve commendation for their performance and general composure even in the Games Village.
Sincere thanks also go to the leadership of our Athlete Commissions (Ghana- and Foreign-based) for their tireless efforts in working with GAA to ensure readiness and a relatively successful outcome at the Games.
As various parties have come out to claim credit for the athletes’ performance, it is imperative to mention that the athletes have been part of the GAA’s grassroots athletics development program that took root almost a decade ago; literally, all of the athletes have participated in local and international meets organized or facilitated by the GAA over the past decade.
For this reason, we must also express our gratitude to all those who have supported GAA over the last decade as we have evolved the system that has, over the years, laid the ground for what we saw in Rabat; but for visa issues and injuries, we should not have been surprised to see a few more golden medals.
In building the structure, we must thank our members across the regions and in the Ghana Education Service (GES), Ghana University Sports Association (GUSA), and the Ministry of Youth and Sports (and particularly the Office of the Minister).
Special mention must be extended to the coaches and technical departments of the various schools, as well as to the non-affiliated, personal coaches who toil day and night to train the athletes.
The financial support for the system has primarily come from a number of corporate sponsors, including the Maria Tsakos Foundation, EventPR, rlg, Sea and Shore, Interplast Ghana, Africanus.net, Cocoa from Ghana, Bank of Ghana, Ghana Commercial Bank, and Just Because Fitness, as well as a host of private individuals. We salute them all and hope that they see these victories as theirs.
For the 2019 African Games, we are also grateful to the team’s coaches who were in Rabat, and Team Athletics’ leader at the Games, Mr. Bawah Fuseini, who also doubles as the Chief Executive Officer (Secretary General) for both the GAA and the Confederation of African Athletics Association (CAA) Zone II board.
As our attention shifts to the 2019 World Championships where both our men’s and women’s relay teams register in the Top-16 in the World but where we also have individual automatic qualifiers like Joseph Paul Amoah, Nadia Eke, and Josephine Anokye, as well as five others who might get the nod when the qualification deadline expires next week, we must specifically acknowledge the $3,430 we received from Just Because Fitness (JBF) and $4,913 advanced from an unnamed individual to enable the women’s team attend the Doha qualifiers at the IAAF World Relays in Japan.”