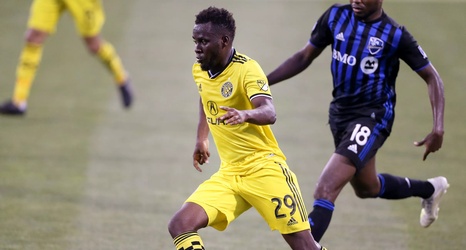 Columbus Crew forward, David Accam, is living up to his nickname of “King” because according to the MLS Player Guide, the former Chicago Fire player, reigns when it comes to yearly earnings in the league.

Accam is currently bagging $1, 010, 004 as a yearly base salary; the most that a Ghanaian player takes in the MLS.

In second place is Black Stars defender and Accam’s team mate at the Crew, Jonathan Mensah, who is on a base salary of $ 800, 004.

The full list of annual salaries of Ghanaian players in the MLS:

Who takes home the most cash in the MLS these days?

No surprises as top place goes to Zlatan Ibrahimovic of the LA Galaxy. The former Man United, PSG, Inter Milan, Ajax and Barcelona man enjoys a yearly salary of $7,200,000.

These figures were published in the MLS Player Salary Guide on www.mlsplayers.org, the website that deals with all player matters related to the league.

The salaries published were those that were being paid as of June 1, 2019.