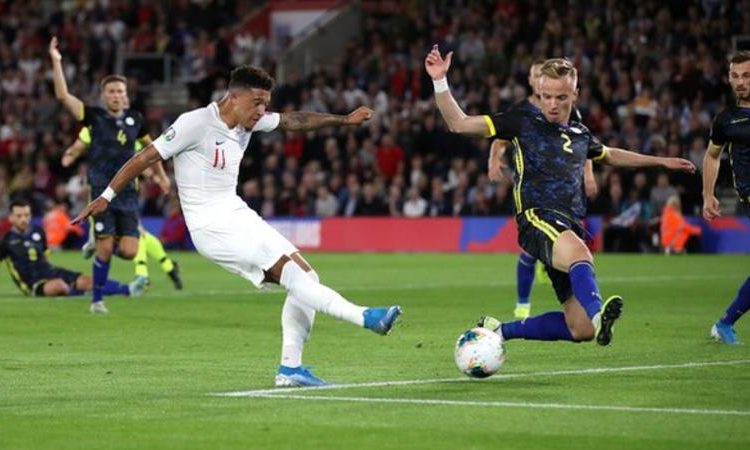 England’s relentless march towards Euro 2020 continued with a thrilling victory over Kosovo, who scored after just 34 seconds.

However, a shoddy defensive display and the fearless approach of their opponents meant this turned into a night of concern for manager Gareth Southgate.

The result leaves England top of Group A with a 100% winning record after four games, while the Czech Republic moved into second place with a 3-0 win over Montenegro.

Kosovo arrived in Southampton on a 15-match unbeaten run and with confidence lifted by victory over the Czechs on Saturday – and when Michael Keane’s error gifted Valon Berisha a goal inside the first minute they briefly contemplated a huge upset.

It did not last long as rampant England, inspired by the magnificent Raheem Sterling, responded ruthlessly with five goals inside the first 45 minutes.

Keane swiftly made amends to set up Sterling to head home after a corner then Manchester City’s unstoppable attacker set up captain Harry Kane for his 26th goal in 41 England appearances.

England extended their lead when Mergim Vojvoda turned Jadon Sancho’s cross into his own net before Borussia Dortmund’s 19-year-old got his first two goals for England, both expertly provided by Sterling.

As an occasionally chaotic encounter swung from end to end, Berisha’s fine finish reignited Kosovo’s hopes early in the second half before more awful defending from Manchester United’s Harry Maguire ended with him conceding a penalty, which Vedat Muriqi scored after he was brought down.