The Normalisation Committee of the Ghana Football Association have fixed the association’s Elective Congress for October 25, 2019.

The date is contained in an election roadmap released by the NC on Saturday as their tenure draws to a close.

The election and swearing in of the new GFA president will be preceded by regional elections on October 18 where regional FA Chairmen will be elected.

The election will be the last mandate of the NC who are expected to exit office and handover to the new administration on October 25.

View the full roadmap of the GFA Elections below: 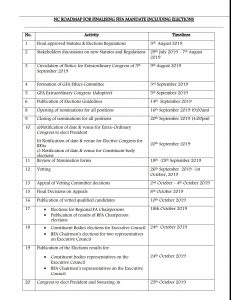 The NC went ahead to detail the guidelines for the upcoming elections and the most notable of them is that aspirants for the Presidency will have to pay GHS 5,000 in filing fees.

The full guidelines can be found here.