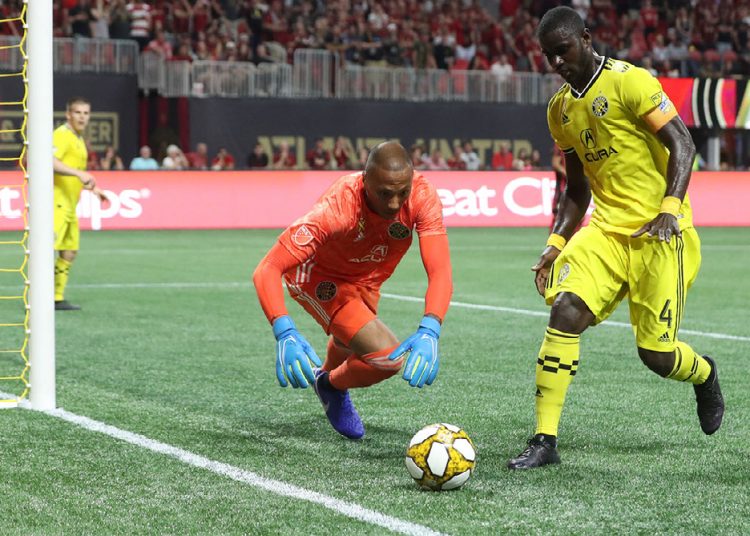 Sep 14, 2019; Atlanta, GA, USA; Columbus Crew goalkeeper Eloy Room (1) makes a save on a ball next to defender Jonathan Mensah (4) in the first half against the Atlanta United at Mercedes-Benz Stadium. Mandatory Credit: Jason Getz-USA TODAY Sports

Ghana’s Jonathan Mensah was full of commendation for his team mates as Columbus Crew a 3-1 win away to defending MLS Champions, Atlanta FC, on Saturday.

Mensah played 90 minutes for the team together with fellow Harrison Afful and they did their best in defence while Luis Diaz, Gyasi Zardes and an own goal from Miles Robinson gave Crew the result o the road.

After the match, Mensah, gave his opinion of his team and the value of the victory for Crew as they chase a place in playoffs.

“The game plan worked, you know? We stuck to the game plan and we were aggressive from the start. Even though we went down a goal we didn’t back down, we kept pushing and we got a big one today.

It’s a great result for us: defending champions, we beat them home and away this season. It’s great for the team and going forward it gives us a lot of confidence to keep going.

Mensah, Afful and the Crew are now 11th on the Western Conference table on 34 points and they will face Vancouver Whitecaps (away), Philadelphia Union (home) and Toronto FC (away) in their final three matches of the regular MLS season.

Lafit Blessing played 90 minutes and got a yellow card in the 78th minute as LAFC as they drew 1-1 at Philadelphia Union.