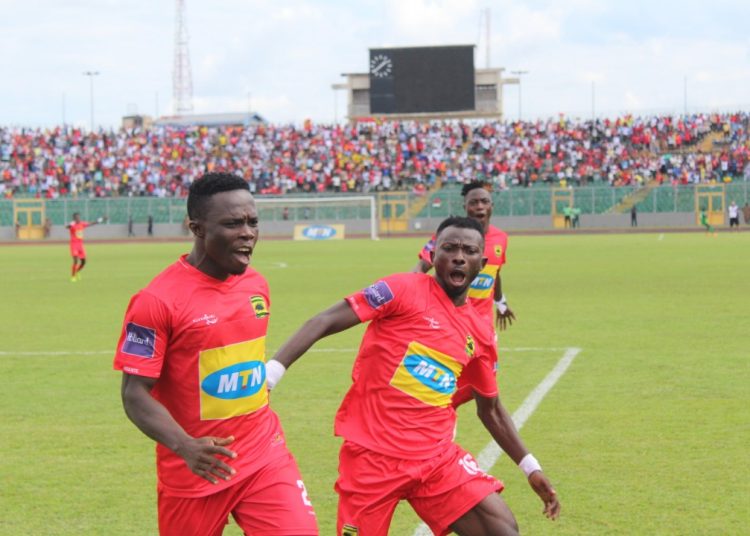 Augustine Okrah put the Porcupine Warriors in front in the 2nd minute before Richard Arthur’s second half strike completed a deserved result in front of an electrifying Baba Yara crowd.

Kjetil Zachariassen made 3 changes to his starting line up, handing places to the experienced duo of Jordan Opoku and August Okrah in midfield while Kenyan striker George Abege was trusted to lead the line in the absence of the suspended Naby Keita Laye.

It was one of the new boys, Okrah, who got Kotoko off to a dream start when right after kick off, they won a free-kick on the edge of the area; Augustine Okrah stepped up and neatly struck it beyond Bdiri Makrem.

As the Kotoko players streamed towards the red stand to celebrate, the crowd went ballistic, the players had given them the perfect energy to feed on for the rest of the game.

Etoile reorganized and looked much better for the rest of the first half but it was Kotoko who still got the better opportunities.

The impressive Okrah fired a shot onto the crossbar before Emmanuel Gyamfi showed quick feet to penetrate the Etoile area; a big shout for a penalty but referee Hasan Corneh wasn’t having it. No penalty.

Kotoko went into the break leading 1-0.

Back from recess, Richard Arthur tapped in an easy chance after finding himself free in the Etoile box after the Tunisians failed to clear corner kick.

The Stadium was deafening, the more than 40,000 fans inside the Baba Yara stadium all waving flags in unison. It was a pure blissful sight of red.

The Tunisians, appearing to be content with only losing by a 2-goal margin, resorted to time wasting which got goalkeeper Bdiri Makrem booked as Kotoko struggled to maintain any rhythm.

Zachariassen threw in Songne Yacouba and Kelvin Andoh to try and inject more pace into attack but it was to no success as the game ended 2-0.

Kotoko will now head to Sousse for the return leg in two weeks time.

Success in that game will see the 2-time African Champions return to the Champions League for the first time since 2006.