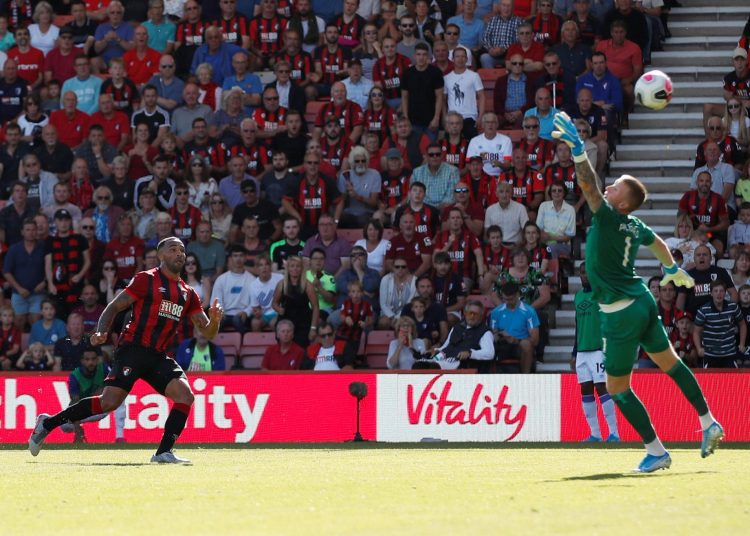 Callum Wilson sent a timely reminder to England manager Gareth Southgate with a brace to help earn Bournemouth a much-needed 3-1 win over Everton in the Premier League.

The forward failed to play a single minute while away on international duty last week, but scored his first goals at the Vitality Stadium since January to help Eddie Howe’s team secure a first home victory of the campaign after back-to-back defeats.

It was harsh on Marco Silva’s Toffees, who created a host of chances but found goalkeeper Aaron Ramsdale in top form. They have now failed to win any of their last six away league fixtures.

Everton had fired two blanks on the road in this season’s Premier League and was missing Andre Gomes to a rib injury, while Dominic Calvert-Lewin was preferred to Moise Kean, who dropped to the bench.

For the Cherries, Lewis Cook returned after a lengthy absence following anterior cruciate ligament damage to his right knee in one of four changes made by Howe from the side which lost at Leicester.

The visitors signaled their intent with three corners inside the opening six minutes, but they were unable to make the most of them.

Bournemouth got into their stride shortly afterward with Cook – on his first competitive appearance since December 4 – pulling the strings.

Howe had picked a team with an average age of 24 years and 195 days, making it their youngest ever starting line-up in a Premier League match and a degree of naivety was shown by Premier League debutant Jack Stacey in the 17th minute.

The Cherries right-back lost possession inside his half and Richarlison attempted to send Calvert-Lewin through on goal, but Ramsdale was quick out of the blocks and thwarted the danger.

Bournemouth’s goalkeeper was motionless two minutes later, though, when Richarlison turned in space after collecting Fabian Delph’s pass and saw a dipping shot from 25 yards hit the crossbar and go out for a goal-kick.

It would have been a stunning opener, but the breakthrough did arrive with 23 minutes on the clock and it went to the home side.

Diego Rico’s corner – flicked-on by Dominic Solanke – came to Joshua King, who might have scored at the back post, but his ball across the face of Everton’s goal was headed home by Wilson.

The close-range effort was the forward’s second goal of the season and first at Vitality Stadium since January 19.

Howe’s changes had so far had the desired effect, but Richarlison remained a threat and went close again with 37 minutes played when he nodded wide from Lucas Digne’s cross.

Bournemouth were struggling to contain the Brazilian and he eventually made an impact a minute before half-time.

Seamus Coleman got forward well on the right and played in Richarlison out wide, who chipped the ball over for Calvert-Lewin to power home a header from six yards – hanging impressively in the air ahead of Steve Cook.

It ensured it was all square at the break, but Everton had the ascendancy and only a fine save by Ramsdale prevented Gylfi Sigurdsson from giving the visitors the lead in the 48th minute with a fierce shot following Digne’s cut-back.

Cherries manager Howe had seen enough and introduced Ryan Fraser with 33 minutes left and in the 67th minute, the substitute helped turn the game.

An excellent run by King relieved the pressure for Bournemouth and Richarlison could only stop the winger with a foul, which earned him a yellow card.

From the resulting free-kick, Fraser’s low curler – which was on target – was sliced into his own net by Delph and beyond England number one Jordan Pickford.

Bournemouth, out of nowhere, had the lead again and five minutes later they increased their advantage following some terrible Everton defending.

Rico knocked a loose ball forward and Wilson had been left alone by both Michael Keane and Yerry Mina and ran through before curling the ball over Pickford from 18 yards.

England Under-21 international Ramsdale was needed again nine minutes from time to deny Alex Iwobi from the edge of the area.

With Lewis Cook receiving a standing ovation in the 77th minute and Wilson back in the goals, there are positive signs for Howe again, but not for Everton, who cannot win on the road.