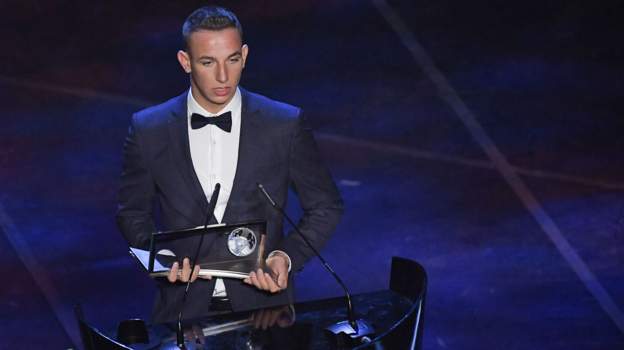 Hungarian international, Dániel Zsóri has been awarded the Puskas Award, the prize for the best goal scored over the course of the year.

The award was handed to Zsóri at FIFA’s The Best Awards in Milan on Monday night.

The player’s stunning goal for his club side Debrecen in a match against Ferencváros TC in February saw him fend off competition from Lionel Messi and Juan Quintero.

He scored in the 93rd minute of his professional debut, having come on as a substitute earlier.

The award, won controversially by Liverpool’s Mo Salah last year has been claimed with some of the best goals ever scored.

Unlike other FIFA prizes, the Puskas Award combines strikes from the top names in world football to players from some of the most obscure teams.

This year was no different as, in addition to Barcelona’s Lionel Messi and Zlatan Ibrahimovic, Cameroon’s Ajara Nchout, Utah Royals’ Amy Rodriguez and Billie Simpson of Cliftonville Ladies have had their strikes nominated for the top prize.

These were the ten finalists (in the order in which they appear in the video), including the winning strike.

Which of these great goals deserves to win FIFA's Puskas Award?