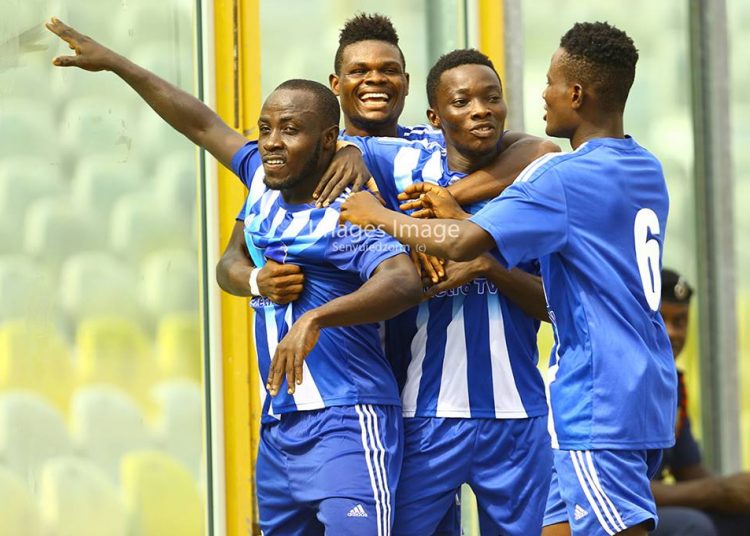 Accra Great Olympics have asked the GFA Normalisation Committee re-instate them and King Faisal into the Ghana Premier League which will start in November this year.

Olympics made this plea in Accra on Thursday at the Accra Sports Stadium during the unveiling of its new jersey for the coming football season.

The club explained that their place in the league was merited because in its estimation, it was relegated at the end of the 2016/ 2017 league season unfairly.

Chairman of the Board of Directors of Accra Great Olympics, Amarkai Amarteifio, addressed the media and fully explained the club’s stance.

“All the major leagues in Europe have 20 teams except Germany which has 18 teams. Thus, if we should we enlarge the base of our league (which has 16 teams), it will enable the GFA to clean the slate and restore justice to Great Olympics and King Faisal.

At the same time, it will broaden the base of the league for more talents to exhibit their skills. This will be a huge service to the nation and it will be one in the interest of justice.”

So how did we get here?

It will be recalled that the Great Olympics held up the start of the 2017/ 2018 Ghana Premier League season after a case they presented against Bechem United for fielding an unqualified player was thrown out by the FA.

So, they wanted a points-deduction to handed to Bechem as stated in the FA’s statutes. The deduction would have saved Olympics from the drop.

The FA, at the time, said the case had been filed outside the stipulated 3-day window prescribed in the statutes.

Subsequently, the team took the issue to the law courts where it lost the case ultimately.

Olympics’ issue with the GFA was that Bechem United’s Joseph Amoah was not qualified to play against them on the final day of the 2016/ 2017 season in a match they lost to send them down to Division One.

However, Amoah’s status as an unqualified player was down to an administrative error on the part of referee Reginald Lathbridge.

Earlier in the season, Lathbridge handled a match between Elmins Sharks and Bechem United and mistakenly wrote in his match report that it was Amoah he had booked. Subsequent yellow cards meant that Amoah should not have played against Olympics on the last day of the season.

The error led Olympics to go on the legal route and almost halted the start of the 2017/ 2018 league season. While they were not successful, the Ghana FA banned Lathbridge for life for his error that almost threw the league season out of gear.

Lathbridge tried changing the match records 7 months later and that drew the anger of the FA.

What about King Faisal?

King Faisal FC suffered relegation in 2014 but they also went to court to get some issues resolved. Their case was that Aduana Stars FC had failed to pay a fine and thus, needed to be punished.

King Faisal took the issue to the GFA’s Disciplinary and Appeals Committee where it lost and thus, went to the law court to have the FA punish Aduana Stars by deducting points; a situation which would have saved Faisal from relegation.

Alfred Duncan opens up on excellent start to his Sassuolo season