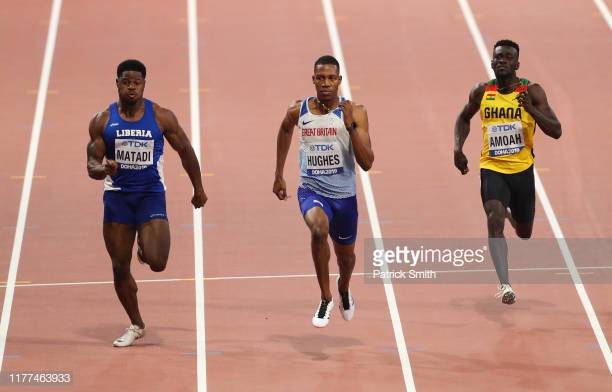 Ghana’s Joseph Paul Amoah finished 6th in Heat 3 of the men’s 100m at the IAAF World Championships in Doha, missing out on a place in the semi final.

The 22 year old crossed the finish line in a time of 10.36s, well above his personal best.

Heat 3 was won by Zharnel Hughes of Great Britain, with Nigeria’s Raymond Ekevwo, and Liberia’s Emmanuel Matadi picking up the top 3 places.

Amoah, who was making his debut at the competition, got off the blocks effectively, but started to wobble about 40 meters into the race as the others began to leave him behind.

“I started breaking down at that point,” Amoah told Citi Sports’ Fentuo Tahiru Fentuo after the race.

“You know, competing in the NCAA is a very long season and I’ve been trying to manage the races.

“I think I started well, but I think fatigue hit me,” he said.

“I’ve been battling injuries, and there’s been too many up and downs since the African Games but unfortunately it didn’t happen.

“I’m still young, the experience will be with me as I look ahead to the Olympics,” he said.

Amoah qualified for both the 100m and the 200m events but opted to compete in only the 100m event.

“My coach fell like the 100m was the one I was better prepared for because I had not run a lot of 200m races. Even at the African Games, I only ran 100m. So that informed our decision.”

Amoah will be back on track next Friday when team Ghana competes in the men’s 4x100m relays.