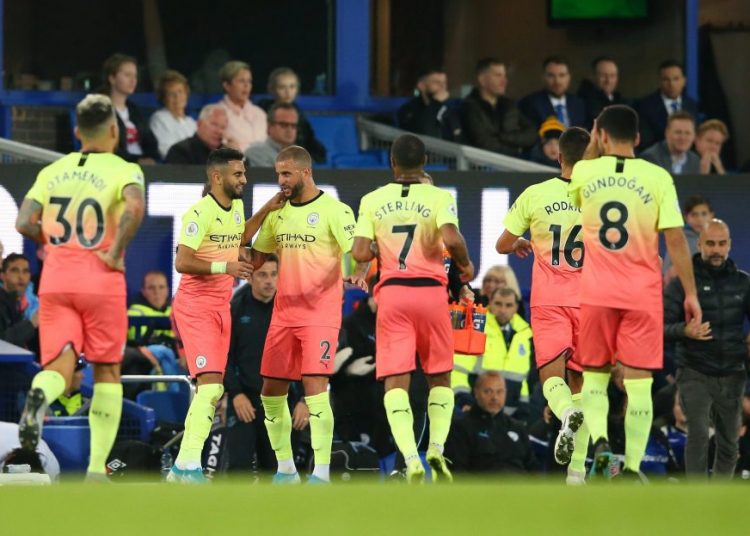 Manchester City responded to Liverpool’s win earlier on Saturday by battling to a 3-1 win against Merseysiders Everton at Goodison Park.

Pep Guardiola’s men knew they could ill-afford to slip up going into the game but it looked like it may be a frustrating evening when Dominic Calvert-Lewin cancelled out Gabriel Jesus’ opener.

Raheem Sterling sealed the win when his left-footed volley cannoned off the bar but went just over the line. This was Sterling’s 100th club career goal but more importantly secured his side a crucial win on a difficult evening.

Following Liverpool’s 1-0 triumph at Sheffield United, City went into the game eight points behind their title rivals so could ill-afford a slip-up.

There was a lengthy stoppage at the start of the game after Theo Walcott suffered suspected concussion after Sterling’s cross from the left hit him on the back of the head.

Walcott was stretchered off after seven minutes. It is understood he’s been taken to hospital and is still being assessed.

City were excellent after that and should have taken the lead when Mahrez’s delightful cross from the right was met by Ilkay Gundogan but the German could only hit the bar from three yards out.

The visitors did get their deserved goal on 24 minutes though when Jesus nodded the ball in after meeting Kevin De Bruyne’s lovely first-time cross.

Jesus’ goal encouraged Everton to come out of their shells and they were rewarded for their efforts with a goal from Calvert-Lewin shortly after City took the lead.

A scramble in the box saw the ball break to Seamus Coleman, who produced a lovely dink that was heading goalbound but the striker helped it in with a close-range header.

After the break, De Bruyne hit the side-netting after riding a Lucas Digne challenge in the box while Yerry Mina forced a smart save from Ederson

Sterling then missed two big chances and it was beginning to look like the Citizens may not win the game.

However, Mahrez’s low curling effort from outside the box managed to beat Jordan Pickford to put City 2-1 up.

The Toffees didn’t lie down and the visitors had their keeper to thank for making two huge saves, first from Calvert-Lewin and then Mina.

Sterling then settled any nerves with his goal on 84 minutes – substitute Sergio Aguero forced Pickford into a save and the England man volleyed the rebound off the bar, with referee Michael Oliver confirming the ball had crossed the line.