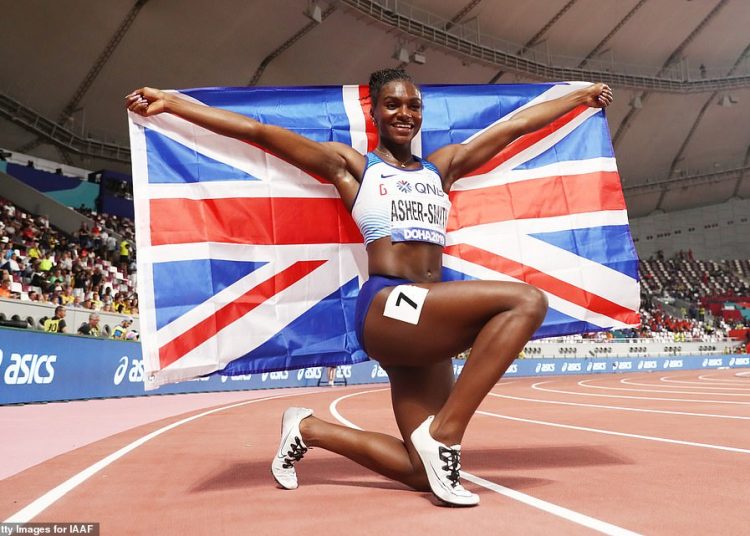 The story of Great Britain’s Dina Asher-Smith saw another brilliant chapter concluded with the 200m gold medal at the 2019 IAAF World Athletics Championships in Doha, Qatar.

And the Great Briton did not disappoint, getting off the block early and running a control race to dip across the finish line in a new British record of 21. 88sec.

Asher-Smith becomes the first ever British woman to claim an a global sprint gold medal.

The victory also doubled Britain’s medal tally at the championships to two, both coming from Asher-Smith.

The once mighty United States, who had been a non-factor in the women’s sprints in Doha, also benefited from the scratches as Brittany Brown grabbed the silver in 22.22.

Switzerland’s Mujinga Kambundji completed the podium by grabbing bronze in 22.51.

Grant Holloway of the United States blazed to his first 110 metres hurdles world title in a dramatic race in which defending champion Omar McLeod fell.

The 21-year-old, who came into the championships with the season’s fastest run of 12.98 seconds, smoothly glided through 10 hurdles to cross the line in 13.10, five hundredths of a second ahead of Sergey Shubenkov.

Favourite to defend his title, Jamaican McLeod came out of the starting blocks fast but his race quickly turned sour as he knocked down hurdles and tumbled to the track before reaching the finish line.

McLeod’s problems seemed to upset Diamond League champion Orlando Ortega in the next lane and he finished fifth in 13.30 seconds.

Spain have since lodged an appeal asking for the race to either be re-held or Ortega be awarded a bronze medal as he was 3rd at the time of the obstruction.

McLeod said he had felt a hamstring strain in the warm-up and thought it would go away.

“I was ready to go, I showed up ready,” McLeod said. “I put myself in the very best situation to defend my title.”

The Russian secured a third medal for the authorised neutral athletes after golds in the women’s pole vault and high jump this week.

Like all other Russians competing in Doha, Shubenkov cannot wear his national colours and brandish the Russian flag during his celebratory lap because the country’s athletics federation remains suspended following a doping scandal.

The bronze medal went to European champion Pascal Martinot-Lagarde, who finished 0.03 seconds behind Shubenkov to give France its second medal of the world championships.

Katarina Johnson-Thompson produced two personal bests as she carried a 96-point lead over defending champion Nafissatou Thiam into day two of the heptathlon at the World Championships.