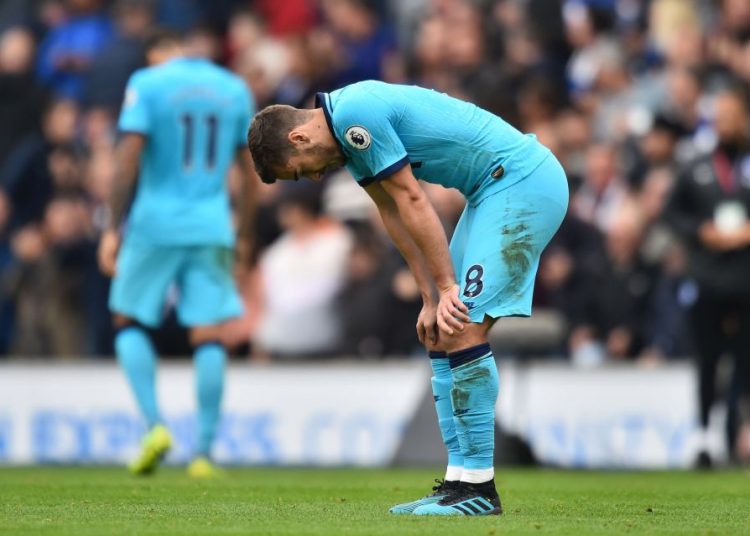 Tottenham’s week from hell went from bad to worse with a 3-0 defeat to Premier League strugglers Brighton on Saturday.

Following their embarrassing 7-2 thrashing at home to Bayern Munich in the Champions League on Wednesday, Spurs responded in the worst possible way by losing to the Seagulls for the first time in 36 years.

Nineteen-year-old forward Aaron Connolly scored twice after Neal Maupay capitalized on another howler from Hugo Lloris to open the scoring in just the third minute.

Lloris was given oxygen taken to the hospital after landing awkwardly on his arm following the error, and talkSPORT understands the Frenchman needed morphine to numb the pain.

It was a game plucked straight from Mauricio Pochettino’s worst nightmares, and pressure on the under-fire Spurs boss will now reach boiling point.

Pochettino was forced to outline his commitment to the job in the build-up to this match but the result and, more notably, the performance will only lead to more speculation that his time could be coming to an end.

They look a million miles away from the side that has challenged at the top end of the Premier League for the last four seasons and their alarming slide in 2019 continues with an 11th defeat of the calendar year.

Their away form is an even bigger concern as they are now 10 games without a league win on the road, going back to January.

In contrast, it was a Red Letter Day for Graham Potter’s men, but it could have been an even bigger win had they not wasted some late chances.

The tone was set by a shambolic start from Spurs.

The contest had barely even started by the time their best-laid plans were thrown into chaos as they endured a nightmare start thanks to another Lloris howler.

It was only last week that the France captain tried a Cruyff turn inside his own six-yard box and got tackled to concede, but this was just as unforgivable and it led to his serious arm injury.

Pascal Gross’ overhit cross ought to have been a routine tip over for the goalkeeper, but he chose to try and catch it and, falling backward on the line, he dropped the ball – allowing Maupay the easiest of nod-ins.

To make matters worse, Lloris suffered a serious arm injury in his fall, which saw him eventually leave the pitch on a stretcher with gas and air and screaming in agony.

It was a horrible way to begin the match, but perfect for Brighton and they made use of their leg-up to run Spurs ragged.

A deserved second goal came just after the half-hour as Spurs were cut open down the right and Connolly got to Dan Burn’s cross first, forcing sub goalkeeper Paulo Gazzaniga into a smart low save, but the teenager was on hand to ram home the rebound for his first Premier League goal.

This was as bad as it had been under Pochettino and it got worse 20 minutes into the second half, with another goal that came down Spurs’ right.

Connolly was set clear by a long ball, he was allowed too much space by Toby Alderweireld and made the most of it by cutting inside and firing into the bottom corner.

Spurs pushed for a late response, with Son Heung-min, Harry Kane and Lucas Moura all wasting good chances, but it was Brighton who was pushing for an even bigger win.

Adam Webster and Gross brought saves out of Gazzaniga as they finished strongly, leaving Spurs with some serious questions to answer.

Andre Ayew scores again after one minute, in Swansea's 2-1 loss to Stoke