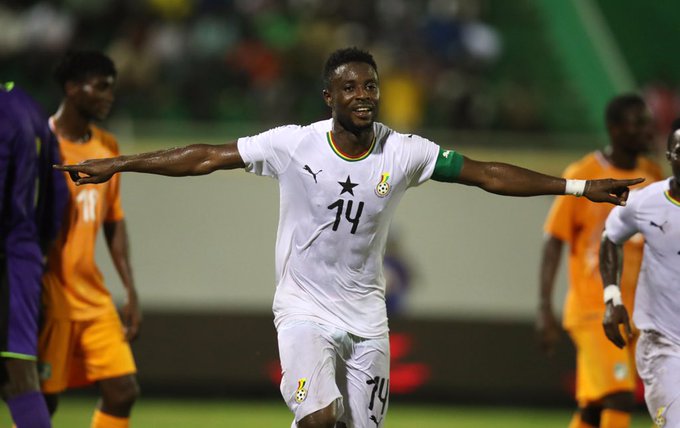 Black Stars B captain, Shafiu Mumuni, grabbed a hat trick as Ghana beat Cote d’Ivoire in the semi-finals of the ongoing WAFU Cup of Nations on Tuesday.

The AshGold forward had not had a great competition despite scoring against Burkina Faso in the quarter finals but against the Ivorians, he came alive and plundered ruthlessly.

After Ghana went close through Augustine Okrah’s free kick that struck the bar, Mumuni scored his first goal of the evening in the 30th minute.

Okrah’s cross was not fully grabbed by the Ivorian goalie but his defenders were not quick to clear the ball and when they did, it went off Mumuni’s body and went into the net until the half time mark.

Things took a very dramatic turn at the start of the second half as Ghana scored their second right from the kick-off. A long pass found Okrah down the right and after beating his marker, he sent a cross into the penalty area for Mumuni to head home his and Ghana’s second.

⚽️ Shafui Mumuni grabs his second on the night and his 3rd goal of the tournament.

Two became three after 50 minutes when Mumuni scored his second headed goal from a cross from the left hand side.

Cote d’Ivoire got  a goal in the 76th minute back through a lovely Aboubacar Doumbia free kick that went through Eric Ofori Antwi who was in post for Ghana.