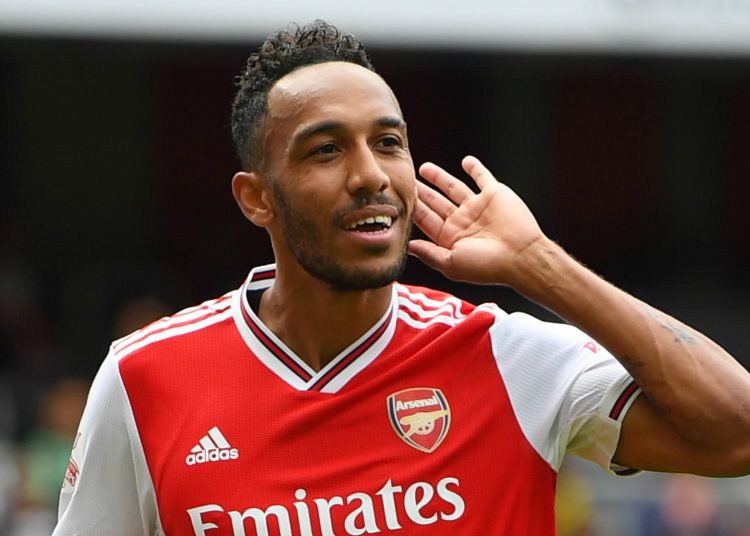 Pierre-Emerick Aubameyang has been named the Premier League’s Player of the Month for September after scoring five goals in four matches.

5️⃣ goals in 4️⃣ #PL appearances 🔥@Aubameyang7 is your @EASPORTSFIFA Player of the Month for September 👏#PLAwards pic.twitter.com/FitYp9S9gJ

The Arsenal striker topped an eight-man shortlist after a vote by the public, as well as by the 20 club captains and a panel of football experts.

Aubameyang’s goals during September were worth five points to Arsenal – he scored twice in their 2-2 draw at Watford, the equalizers in draws with Tottenham and Manchester United and the late winner with a free-kick against Aston Villa.

The 30-year-old – who was the joint Golden Boot winner last season – now has seven goals for the campaign, which puts him behind only Tammy Abraham and Sergio Aguero in the scorers’ charts.

It is the second time Aubameyang has been named the Premier League’s Player of the Month – the first came almost exactly a year ago, on October 2018.

Jurgen Klopp has won the Barclays Manager of the Month award for the second month in a row.

The German’s Premier League leaders won all three matches, with a home victory over Newcastle United followed by away triumphs at Chelsea and Sheffield United, which took the Reds’ winning streak in the competition to 16 matches.

The sequence of straight victories was then extended to 17 against Leicester City last weekend, giving Klopp’s side the chance to equal Manchester City’s competition record of 18 when they visit Manchester United after the international break.

The 52-year-old has now claimed the award for the fifth time.

He topped a four-man shortlist after votes from the public were combined with those of a panel of football experts, beating Eddie Howe, Frank Lampard, and Brendan Rodgers.

Moussa Djenepo has won the September Budweiser Goal of the Month award for his skillful solo winner for Southampton at Sheffield United.

On his first Premier League start, Djenepo used brilliant skill and strength to hold off a Sheff Utd midfielder before beating two defenders and striking past goalkeeper Dean Henderson to secure a 1-0 victory.

It is the second time in a row that the Budweiser Goal of the Month has been scored at Bramall Lane. August’s winner from Leicester City’s Harvey Barnes came there too.

Djenepo’s effort was chosen as the winner by a panel of experts combined with a public vote, beating seven other September contenders.

The 21-year-old claims Southampton’s first Goal of the Month award since his team-mate Sofiane Boufal won with a solo run against West Bromwich Albion in October 2017, a strike that was also voted the best of the Premier League season.

The Malian is also only the fourth player from Africa to pick up the prize, following Boufal, Jean Michael Seri and Victor Wanyama.