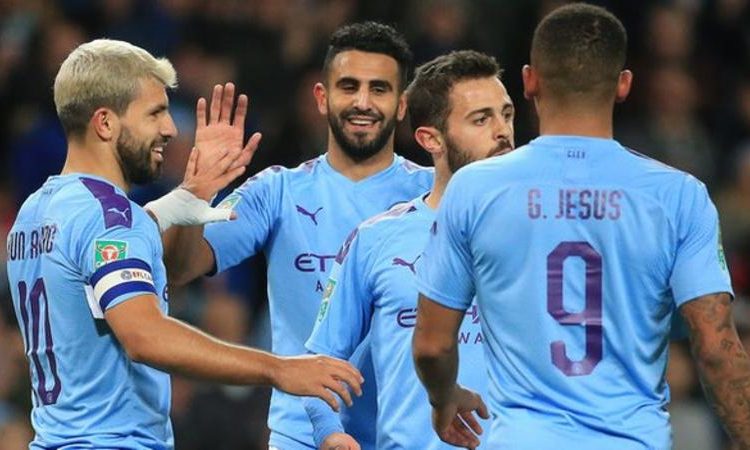 Holders Manchester City eased into the quarter-finals of the Carabao Cup after seeing off a Southampton side who were focused on damage limitation after their humiliating home loss against Leicester.

Saints, who had shipped nine goals against the Foxes on Friday night, sat deep for most of a one-sided match at the Etihad Stadium but at least avoided another embarrassing scoreline.

Ralph Hasenhuttl’s side held out until the 20th minute, when they were slow to react to a short corner and Nicolas Otamendi rose highest to nod home Bernardo Silva’s cross.

Sergio Aguero made it 2-0 before the break with his 11th goal of the season, finding space six yards out to turn in Kyle Walker’s pull-back.

The Argentine striker added his side’s third on 57 minutes, getting on the end of a deflected Riyad Mahrez effort to steer a falling ball through Alex McCarthy’s legs.

In total, a much-changed City side had 19 shots at goal, while Saints barely made it out of their own half before the break and had to wait until the 65th minute for their first effort, when Claudio Bravo kept out Sofiane Boufal’s curling shot from the edge the box.

That brought an ironic chant of ‘we’ve had a shot’ from the travelling fans but they were given a genuine reason to cheer before the end when Jack Stephens headed home a consolation from James Ward-Prowse’s corner.

City, who have won this competition in each of the past two seasons, will find out their opponents in the last eight on Thursday.